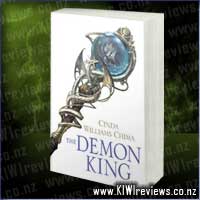 Times are hard in the mountain city of Fellsmarch. Reformed thief Han Alister will do almost anything to eke out a living for himself, his mother, and his sister Mari. Ironically, the only thing of value he has is something he can't sell. For as long as Han can remember, he's worn thick silver cuffs engraved with runes. They're clearly magicked - as he grows, they grow, and he's never been able to get them off.

While out hunting one day, Han and his Clan friend, 'Dancer', catch three young wizards setting fire to the sacred mountain of Hanalea. After a confrontation, Han takes an amulet from Micah Bayar, son of the High Wizard, to ensure the boy won't use it against them. Han soon learns that the amulet has an evil history - it once belonged to the Demon King, the wizard who nearly destroyed the world a millennium ago. With a magical piece that powerful at stake, Han knows that the Bayars will stop at nothing to get it back.

Meanwhile, Raisa ana'Marianna, Princess Heir of the Fells, has her own battles to fight. She's just returned to court after three years of relative freedom with her father's family at Demonai camp - riding, hunting, and working the famous Clan markets. Although Raisa will become eligible for marriage after her sixteenth name-day, she isn't looking forward to trading in her common sense and new skills for etiquette tutors and stuffy parties.

Raisa wants to be more than an ornament in a glittering cage. She aspires to be like Hanalea - the legendary warrior queen who killed the Demon King and saved the world. But it seems like her mother has other plans for her - plans that include a suitor who goes against everything the Queendom stands for.

From the moment I started reading "The Demon King", I was totally captivated in a story that sweeps you up in a mix of fantasy, drama, and adventure, making it hard to get any other work done because all I wanted to do was read! This is the first of Cinda Williams Chima's novels that I've tried, but she is another one to join my now rather long list of authors to watch out for.

Chima has created a set of very strong characters for her "Seven Realms" Trilogy, most of whom are rather hard not to like. There's the fiesty street rat... Han "Cuffs" Alister, who has given up the "life" in order to try and make an honest living to feed and look after his mother and little sister, but it doesn't seem to want to let him go, so Han is forever getting himself into trouble, and it's rather hard to hide with a pair of silver cuffs wrapped around his wrists that refuse to budge, no matter what Han tries. Han is fiercely loyal to those he loves, with the cocky confidence of someone who knows his worth and knows how to work around people.

Then there's the equally feisty Raisa ana'Marianna, the Princess Heir who in many ways is quite a spoilt brat, stubborn, strong willed, very much a rebel, and is looking forward to her Name Day so that she can have the fun of "playing the field" and tormenting any potential suitors while delaying any talk of actual marriage as long as possible. She's also very keen on learning how to be a better ruler for her people, smart, loyal, and not in the slightest bit afraid to stand up for what she believes in. Rules are made to be broken right?

Micah Bayer is the magician that Raisa rebelliously flirts with, even though relationships/marriage between Magicians and Royalty are forbidden. In many ways, Micah is nothing more than a bully who will stop at nothing to do the bidding of his father, but there are brief hints of something more, a gentler side that is hidden behind the confident arrogance of a magician who thinks his power is enough to get him anything... and anyone.

There are other characters who play smaller, yet still important roles, such as Han's clan friend, Dancer; Amon Byrne, Raisa's childhood friend who has returned from the military school at Oden Ford to become a Corporal in the Queen's Guard, who is now capturing Raisa's attention on quite a different level than she'd expected of her old friend; Lucius, the old drunk who Han runs errands for from time to time; Marianna, the Queen and Raisa's mother; plus many others.. all who form a fascinating cast who draw you in and bring you on a journey filled with magic, a hint of romance, danger, and a huge helping of adventure as their lives collide and weave together, along with the past.

I really can't wait to see where the author takes this series and will be champing at the bit to get stuck into book 2, "The Exiled Queen", along with wanting to go hunting for her other trilogy, "The Heir Series".

This an excellent young adult fantasy that completely drew me in and carried me all the way through to the end, leaving me desperate for part two of the trilogy.

Han is an ex-thief trying to remain that way (difficult when times get hard and his baby sister is depending on him); Raisa is a pampered and over-protected princess desperate to know more about the real world. It was surprisingly easy to follow their intertwined paths through the beginning of what is shaping up to be a brilliant story with plenty of fun twists, love triangles and thrilling action.

The Demon King is one of those rare fantasy stories that does not overburden the reader with too many characters, gets right to the point and has enough character development and relationships to balance out the action. There are some fun dalliances to keep the girls amused and plenty of magical intrigue for the guys (or vice versa, depending on your preferences).

Overall, just a really well balanced story that deserves its spot on my shelf next to other favourites such as 'The Hunger Games' and Sara Douglass' latest 'Darkglass Mountain' series.

The Golden Age of Science Fiction, from the early 1940s through the 1950s, saw an explosion of talent in SF writing, including authors such as Isaac Asimov, Robert A. Heinlein and Theodore Sturgeon.