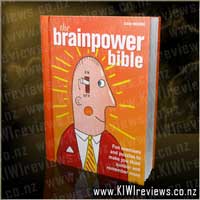 Fun exercises and puzzles to make you think quicker and remember more.

Keep your mind alert and active, think faster and improve your memory with this fun-filled, puzzle-packed book designed to empower your brain.
•  Learn how to approach, tackle and solve hundreds of puzzles and brainteasers of different levels - easy, intermediate and hard.
•  Exercise your brain with Sudoku, logic problems, spatial awareness challenges, word and math puzzles and visual teasers.
•  Discover how to improve your lateral and analytical thinking. Become more creative at solving problems. It's like aerobics for the mind.

I have always been proud of my creative and lateral thinking talents... practiced over many years and fueled by the imagination of some of the most astounding authors of the last 5 decades, across a whole gamut of genres from sci-fi to high-energy physics... and yet, I found some of these puzzles to be the most challenging I have come across in the last 10 years.

Some of the maths puzzles blew all my self-assurances of number ability out the window, and I am ashamed to say that this book is aimed at KIDS less than half my age - I feel like I should be on one of those TV shows that try to prove adults are dumber than today's kids.

In fairness, some of the tricks in the book *do appear* to be designed for younger, more flexible minds, that don't have a lifetime of predefined patterns burned into the brain structure. Some of the 'what is the next element in the pattern' were quite simple to solve. Once you found the rule, applying it to the pattern as a whole gave you a clear shot at the next in sequence, and for any Sudoku puzzler a fair chunk of the row-and-column puzzles were very simple to grasp... yet many of the puzzles would scare the hell out of me if I saw a pre-teen solving them with anything less than tears of frustration pouring from their eyes.

I tried random pages on some kids, and found that as a general rule the not-quite-teens managed the best - as was expected - but surprisingly some of the brighter 7-9 year olds did remarkably well, especially on the lateral thinking tests. I suspect this has a lot to do with the lack of preconceived ideas and established patterns of thinking, more than any great feats of mental rationalisation and analysis. Still, it was a jaw-dropping experiment that left me shaking in fear of my impending redundancy to the gene pool.

Overall, a pretty good book, though tough enough in places that I would hesitate to buy it for anyone under 15 years old really. Which is a bit of a shame, because by the time they are capable of whipping through the book, they're at an age where such things are just *not* what is on their minds the most.