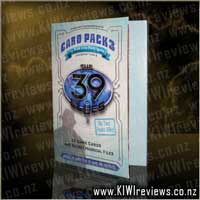 This card pack is for books 7 and 8 in the series, and introduces more characters, agents, secrets, founders and combo cards, as well as unlocking more clues.

As always the 39 clues card packs are an awesome companion to the books and this one is no exception, in fact this has to be the better of the 3 packs released so far, and now with the added bonus of Madrigal branch cards this makes for any even more varied collection of cards and information.

So as the 39 clues adventure begins to head down the slope to the finale these card packs seem to be becoming more of a requirement to help you to solve the riddle of the 39 clues.

Card pack three is the best so far, with a cool Madrigal book to help you keep track of which cards you have got and which ones you still need to track down and also challenge you with puzzles and clues about the mysterious Madrigal branch... this really is an exciting and interactive adventure. I love that there are still card replicators inside most packs to allow us collectors to 'buy' cards we can't seem to find. It lowers frustration and expense quite significantly. Still excellent artwork, puzzles and fun for a surprisingly wide range of ages, I would definitely recommend being part of the wider 39 Clues collectable card and website community!

The cover of this card pack looked very nice because it had very good artwork on it, and the shadow of a Madrigal made it look dark and mysterious. The secret Madrigal files seemed full of adventure, and it was good to have because it had a card list that covered all three card packs.

Having a young son well inside the target audience range for this series, and joining him in a love of all things cryptographic and puzzle, I have had great pleasure in following this series since it's inception back in 2008. I have watched with great delight and no small modicum of impressed as the franchise has grown from a single book, a rather awkward website and a few dozen collector cards, to a worldwide passion for kids, with 7 of the 10 planned books now in print, hundreds of cards, and a website that is growing in both design and interactivity month by month.

This card pack brings no new features, no new ways to play... more's the pity... but it does bring a greater scope to the overall storyline, and introduces more characters to the mythos, as well as more secrets, locations and mysteries... plus unlocks more clues... in the 63 cards it is comprised of. Unlike the previous two packs, it covers only two books, to make way for a fourth pack to cover the last two books. I think this was a very smart move, as the plot becomes deeper and more involved as the story progresses, and thus it will allow the content of the fourth set of cards to focus on the 'closing game' stages.

Overall, a very fun addition to the ongoing saga that is The 39 Clues, and I look forward to reading Book 8 - The Emperor's Code by Gordon Korman, author of Book 2 - to see how each of these cards fit into the greater plot.