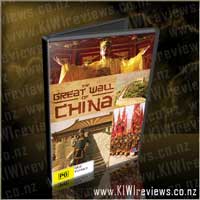 A compelling insight into the greatest man-made structure in the world, through the tales of three very different individuals who helped to forge a nation and create an icon, this is the human story of the Great Wall of China. More than 3000 miles in length, built in just 20 years by a workforce almost 2 million strong.

Quite possibly the greatest human construction that still survives today, the Great Wall of China has a chequered past and no clearly defined period of construction.

The Great Wall began as a series of smaller walls scattered throughout the normern regions of the Chinese-Mongolian borderland, at the southern edge of the Gobi desert. Cver the centuries, and in fact millenia, the wall has grown and shunk, built up by local and army labour over the span of lifetimes, then beaten down by invaders and weather, it was a most transient structure until the vision of one man brought it forward and into the realm of possible.

Some versions of history tell of how the wall is built from the bones of millions of workers, and possibly some aspect of this is true, since they did have to work constantly, this documentary sheds a lot of new light on the circumstances surrounding the construction of the wall as we know it today... not just how it was built and by whom, but also why it was built the way it was and how it was designed to function.

Overall, a fascinating journey through time. Very illuminating and educational, I found myself lost in the story of Qi, the man who's vision went from a rough concept to one of the greatest achievements of military construction in existence. The re-enactments were top notch, with incredibly detailled costuming and acting that was bulletproof. I was utterly impressed, and for a doco to do that... that's saying something.