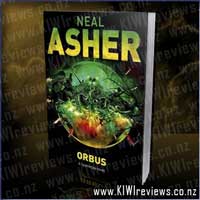 In charge of an old cargo spaceship, the Old Captain Orbus flees a violent and sadistic past, but he doesn't know that the lethal war drone, Sniper, is a stowaway, and that the past is rapidly catching up with him. His old enemy the Prador Vrell, mutated by the Spatterjay virus into something powerful and dangerous, has seized control of a Prador dreadnought, murdering its crew, and is now seeking to exact vengeance on those who tried to have him killed.

Their courses inexorably converge in the Graveyard, the border realm lying between the Polity and the Prador Kingdom, a place filled with the ruins left by past genocides and interplanetary war. But this is the home of the Golgoloth, monster to a race of monsters, the place where a centuries-long cold war is being fought.

Meanwhile, the terrifying Prador King is coming, prepared to do anything to ensure Vrell's death and keep certain deadly secrets buried ...and somewhere out there something that has annihilated civilizations is stirring from a slumber of five million years.

The cold war is heating up, fast.

-woot- but I do *love* Asher's 'Polity' stories! Especially those that involve remains of the 'old three' civilizations: the Atheter (now known to be the Gabbleducks' original form), the insectile Csorians, and of course the Jain... those bionanotech gurus who created weapons so devastating, it is still able to wipe out entire worlds in a matter of hours, 5 million years after the source race vanished.

In this tale we are given a real treat... we find out the true nature and history of the Spatterjay Virus, we see a vicious Old Captain get an eye-opening rveleation into his own heart, and we see a changing of the highest guard in more ways than one. A real noodle-bender, and as absorbing as any of Asher's best yet.

The only thing that left me feeling a bit sad was the realisation that by the end of this book, the three greatest mysteries of Asher's 'Polity' universe - the three 'old races' are now utterly out in the open... so it will be of great interest to see where Asher takes the next book.

Overall, this book is utterly packed to the bulkheads with action, intrigue, revelations, machinations, the usual mix of assorted violences (though thankfully, very few scenes of abject bloody gore, so a slight deviation from Asher's usual Prador-Human interactions) and quite a lot of space battle... just the thing to keep you tucked up out of the burning sun, nose stuck between pages soaking up escapism at it's finest. If you have encountered any previous Asher books, you're going to want this one too... if you don't know who Neal Asher is yet... time to find out! But you may want to wait until August 2010 for the paperback, or go make good use of your local library!

Stan was a rare dinosaur,
a one of a kind.
Most roared from their front,
HIS roar came from his BEHIND!

You'll split your pants laughing at Stan, the world's only STINK-O-SAURUS. But can his stinky antics save the day and keep Tommy T-Rex far away?

Included is a CD featuring a hilarious song with an easy melody and a catchy refrain.