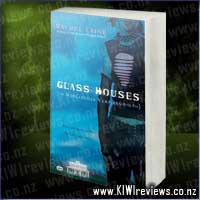 College freshman Claire Danvers has had enough of her nightmarish dorm situation. When Claire heads off-campus, the imposing old house where she finds a room may not be much better. Her new roommates don't show many signs of life, but they'll have Claire's back when the town's deepest secrets come crawling out, hungry for fresh blood.

The Human Body - A Journey of Discovery
Rating: 9.5

If there ever was a book that I have read from cover to cover in two days, it would be this book! Not only is the book addictive, it is so intense that you really don't want to put it down and cook dinner, watch your favourite television show or do pretty much anything else! I have actually given the series to my mother to read as well - she has begun to devour them in the same way that I did!

Seriously, I know living in Morganville is dangerous and all (given how many mortal enemies Claire is making), but I would SO take the chance to step through the pages and into the town! I have the uttermost respect for Claire and think she's not only brave and courageous, but also unbelievable strong minded!!

I cannot recommend this series any higher: you will get hooked, and before you know it, you'll be waiting for the next release to the series to find out what the heroin has to deal with this time!

Very fast and easy read, where vampires existing outside your front doorstep is a fairly well acknowledged fact. Claire Danvers is new to Morganville, so she's not up with the whole Vampire thing, but it doesn't take her long to get into the groove and realize her life was pretty much forfeit the day she corrected a stuck up preppy girl at college about the location of the second world war.

Now she's hiding out in the Glass House, but it has secrets of its own.

I liked this story, despite the fact that it was quite limited in character depth and direction. It really seemed more like the first chapter - which it kind of was. Apparently the Morganville Vampires is a whole continuous series, which would explain the massive cliff hangar at the end of this instalment.

I'd recommend not to start this unless you have the located the next one first - I am currently hunting through my local libraries for a copy that isn't 'on loan' until after Christmas!