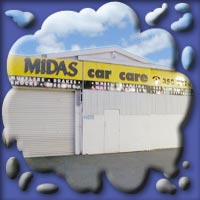 NOTE: This information was sourced from the Online Yellow Pages


ADMIN NOTE: This centre has now, finally, been closed down. The Midas Franchise has NOT been accepted by anyone in the Manawatu region as of March 2007.

i took my car to these jerks a few months ago and they said they would replace all four sets of brakepads, retighten the handbrake cable and perform a safety check. they did most of this, they forgot to do the handbrake cable, and the bill was huge. i took their quote to another repairer who quoted me $85 less than midas and actually offered to let me watch the process to make sure i was totally happy with the job. they even offered to replace the worn fanbelt for just the cost of the belt, no labour charge. i was not at all happy with the attitude of the midas staff, they were sharp, abrupt and bossy. i am so glad to see them on the way out, but i will never deal with any midas store again, i have no faith in them, and what i have read here confirms that opinion. if the rot starts at the top, whats underneath cant be all that great either.

After much email discussions with the 'Master Franchisor' for the entire NZ Midas network, no further action has been taken by Midas to remedy the situation.

In fact, they have refused to reply to my last email, sent OVER A MONTH AGO!

I have sought legal advice on this matter, and have been advised that I would pay more in legal expenses than I could ever hope to claim off these people. So I have decided to let the matter rest.

However, I wish to make it VERY clear, that the standard of (dis)service I have received from the 'top dog' of the operation, and the local team (who are now out on their butts, with the PN franchise up for resale. As quoted directly from the email I received from the General Manager of Midas NZ: "Ultimately if a Franchise delivers poor service then I as Master Franchisor can remove the franchisee, something which I have done recently due to repeated poor service.") has been utterly disgusting. I am appalled that this sort of 'customer service' can happen in today's highly competitive market.

What does that tell you? It tells me that they just don't have a clue, and should be very careful who they treat so badly... you never know when someone will skip the 'tell us' part and go straight to the 'tell everyone else!' :)

ps. To Midas NZ - Knowing that I have zero faith in the ability of a team you admitted were providing regular crap service, you could have at least offered to cover the costs (up to a reasonable limit) of getting the situation fixed elsewhere, instead of bleating on from upon your high horse. Even a $50 refund would have made me happy enough, but you wanted to play staunch. Silly boys. Now everyone is going to know how useless your techs are.

Driving along, need to stop, apply brakes... SQUEEEEEEEEEEKKKKKKKKKK! Argh! OK, start ringing around to see who can do what for my poor old P.O.S. on wheels.

Midas ran to the top of the list by offering a free brake assessment. "Cool! I'll bring it in today, is that ok with you?" It was, so off I went. Left the car in the hands of the serviceman and went and had a sit-down in their tiny but comfortable waiting room. After 10 minutes he called me out to see the issues. "The front brakes are fine, nothing wrong. Back brakes, well, the pads are gone, the cycliners are leaking, and the squeek is brake fluid on the brake shoes. We'll replace the pads and cyclinders, clean the shoes to kill the noise, top up the fluid, hour and half labour... $185-$190. Want me to do it now?" "No thanks, I need time to save the money. How long til it's a safety issue?" "Now, mate." "Hmmm... I'll risk it for a week thanks."

So, a week rolls past, I get some money freed up and book the car in. "I understand I need to leave it with you, but I will have my son with me so I can't walk around all day." "No worries, courtesy car is available! Drop yours in, we'll call you when it's done." "Excellent! Seeya soon!"

Drop the car off. ALL DAY rolls past, and in the end I call them. "How's it going?" "Ummm... we can't find the original estimate, so I need to know what I am charging you." "Whatever it takes, but it won't be more than the QUOTE I was given." "Ummm... OK. Drop the car off and collect yours. We shut soon, so just pay at the petrol station next door." "Yeah, OK. Bye."

By this time I was starting to wonder about these guys... they didn't seem to have a very smooth operation at all! Ah well, go get the car and be rid of them. Collect the car from out the back, drive round the front, apply brakes.... SQUUEEEEEEEEEEEEKKKKKKKKK! ARGH! Oh well, it might just be new brakes wearing in I guess, see what happens...

Well, 4 days later, the brakes still squeek, and after a phone call with the store manager who told me "We replaced the pads and cycliners, that's all you get" (and seemed unable to understand the simple concept of "The problem that made me bring the car in is still there. Was your assessment faulty, or your final workmanship? Either way, the original problem WAS NOT FIXED!") I walked away out of pocket $180 for a job I don't feel was completed properly. Either something was missed in the assessment, making it a slack job, or the repairs were not done properly, making it a slack job. See a pattern forming here?

Overall... as I told the Manager at the end of our 'discussion'... "I would not want you idiots touching my car ever again. I doubt it would be improved at all!" and I stick to that. I will *NEVER* deal with these 'professionals' again! End of story. Despite them starting out impressively, the end result was pathetic.

NOTE: This situation applies only to the store listed, and may not reflect on the workmanship or ability of any other MIDAS franchise.

It has been over a month. After a phone call to the Head Office a few days after posting this review, and sending them a link to this page as well, I received an email confirming receipt, and informing me they were treating this as a customer complaint. Since then, I have had no reply or response at all. A most disappointing ending to a rather frustrating and annoying situation. Double-plus un-good folks.

We have been operating in Invercargill and Southland since August 2005. We Started as ARC Films in a small 6 x 7m shed out the back of our house in Glengarry.and change our name to Window Tint South in late 2006.
2007 saw us move to a larger premise to help expand the business.
2011 We moved house and built the workshop we now operate from.

We can tint almost anything that has glass.

We also have frosted obscured ... more...