« Shaun of the Dead review 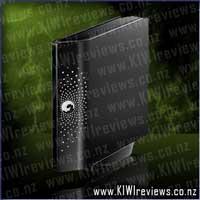 Security and stability aplenty. It's not enough to store your files. You have to keep them safe.
•  Protect your stuff with automatic backup software
•  Keep your privacy with powerful encryption software
•  Enjoy the peace of mind of a 5-year limited warranty

Designed to look as good as it works. It's going to be on your desktop. It should look like it belongs there.
•  A sleek combination of shape, lighting, materials, and finish
•  Lay it flat or on its side
•  Saves energy with smart utilities that rest your drive after 15 minutes of idle time
•  Preloaded software. No setup or CDs

It's not often I get a chance to put a big grunty drive through it's paces... and I must admit despite having a working machine jam-packed with SATA drives, this is the first time I have used eSATA... and it was a bit of an eye-opener really...

For a start, speed tests. As is clear, this site doesn't do the whole 'laboratory, ideal-conditions, best-possible' type tests... that stuff is unrealistic for a start. Who in their right mind is going to do a clean install of their OS just so they can run a new external drive for crying out loud. Leave that fluff for the poncy magazines and blogs... Here, we test it like you use it... on a well-used, functional but slightly cluttered, beaten-hard-and-left-wet PC with a bunch of fairly common apps... like Adobe suites and a few games on it. Then at least you'll, see something closer to what you can expect...

Now this black beauty has three interfaces... suh-weet! You have your always-popular USB 2.0, the MAC-ish Firewire (great for those into digital video work) and the zippy little red ribbon'd eSATA... and here are the speed test results:

As you can see, eSATA seriously take the gold medal for transfer speeds, between 2x and 3x faster. The very BEST run on eSATA had a top transfer speed close to 90MB/sec, but because we didn't get more runs close to that, we had to let it slide. By this measure, it is clear that if you have the ability, you should seriously consider an eSATA connection to this unit. HOWEVER...

A strange and somewhat annoying side-effect of eSATA is that it appears to be unhappy with low-power stand-by mode... when the drive puts itself into power-saving mode, the connection dies, and won't reinitialise on activty-attempt... this is a side-effect of older-style eSATA drivers, and can sometimes be solved by downloading updated drivers, or more easily, simply firing up the Seagate Manager utility (which should be installed as soon as the drive is attached, as an installer comes pre-loaded) and use it to deactivate the power-saving mode entirely.

A little more in the 'aesthetic' department... style - you can't beat this. Sleek and smooth, it sits beautiful in black with a stylish illuminated logo on the front that glows a soft, steady pale blue-white when powered up, and pulses gently during drive activity. It also operates absolutely silently... I mean, I couldn't hear it spinning even with my ear pressed right against it during heavy transfers.

The software works effortlessly, with installation a breeze, configuration smooth and simple, and operation pretty much automatic. You can set it to backup anything from selected files, through to entire drives. If it got any easier, they'd have to market it as self-aware!

Overall, though this drive is now a bit dated, it still holds a place on the desks of home users and small businesses. It's more portable than a NAS but has storage capabilities approaching that level, so would do well for digital media designers, Photoshop junkies and probably DJs as well. An excellent investment... if you can still find them... but be aware that some early models had shorter-than-optimum lifespans, so beware the 2nd hand units appearing cheap on online auction sites.