ProdID: 2343 - Shaun of the Dead
Directed by Edgar Wright 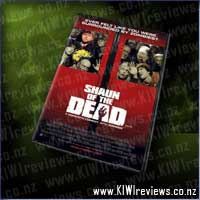 Shaun of the Dead product reviews

Life is going nowhere for Shaun. He spends his life in his local pub, The winchester, with his best mate Ed, has issues with his Mum and Neglects his girlfriend Liz.

When Liz dumps, Shaun finally decides to get his life in order He must win back the heart of his girlfriend, repair his relationship with his mum and face up to the responsibilities of adulthood.

Unfortunately, The Dead are returning to life and attempting to eat the living. For the newly inspired Shaun, this is just another obstacle. In the face of a full scale Zombie Epidemic, armed with a cricket bat and spade, Shaun sets out with Ed in tow, to rescue his mum and grudgingly his step dad, his girlfriend and even more grudgingly her friends David and Dianne and take them to the safest most secure place he knows, The Winchester.

Inspired by classic zombie horror movies much as 'Land of the Dead', 'Dawn of the Dead', and 'Night of the Dead', 'Shaun of the Dead' is a funny spoof that follows on from the British humour that come to be expected after widely acclaimed 'Hot Fuzz'. The movie involves a man, who is confronted with a zombie apocalypse, and attempts to seek safety in the most British of places, the pub.

Watching this movie with friends I noticed that they found it far more hilarious than I did. Every couple of minutes they were in hysterics, and a couple were on the floor laughing, and yet I only had a slight chuckle at a few moments. I found there were too many similarities between 'Shaun of the Dead' and 'Hot Fuzz', both focused on a small party taking on a multitude of destruction and death. Whilst 'Hot Fuzz' contained a lot of witty humour, it seemed that Shaun of the Dead was lacking, and instead depended on slapstick to drive the comedy.

It was nice to see a non-serious zombie movie, but I feel they should have pushed it further, as the plot was thin and limited. But emphasising my first point; this was a funny movie, and my friends found it extremely entertaining, however I felt it was a step down in comedic value, from 'Hot Fuzz'.

Pure brilliance packed into a circular piece of plastic.

As soon as i saw the cover for Shaun of the Dead I was already thinking "this looks awsome". I would have to say that this is the funniest movie I've seen in a long long time, the actors were perfect and even the premise was fantastic (zombie outbreak in a sleepy little british town). Had me laughing the whole way through, which is saying quite a bit for me.

Also if your a fan of Simon Pegg you'll definitly want to check out Hot Fuzz which Im pretty sure is done by the same people.

I was reluctant to watch this movie (I don't do horror), but my brother assured me I would like it.

This is about as far from horror as you can get, for a zombie movie. It's hilarious. Well, if you like Simon Pegg's characteristic humor, that is (think man going to the dairy, buying a beer and making it all the way home completely oblivious to the zombies wandering around, crashing into lamp posts and chewing off their own arms...) Very British. Plenty of blood, spatter, gore and an excellent ending, in keeping with the genre.

A fine example of British humour.

I was not inclined to watch this initially - zombies, ughhh!!
But my children assured me it was a good comedy, and....well, now I agree.

Although it is a totally different set up, Shaun of the Dead seemed similar to the movie 'Being There' - in that a series of cascading events of increasing importance unfold around a very likeable, but rather gormless 'hero by default'.

As the situation gets worse, descending into total zombie mayhem, Shaun keeps his unwavering focus (whilst swatting zombies out of the way) on winning back his girlfriend. His simple few step plan of action to achieve his goal reminded me of Pooh Bear's plans to find one of Rabbit's friends-and-relations called Small (..."find Piglet to find out who Small is, then Find Small, find Rabbit to tell him we found Small...etc). At times moving from the sublime to the ridiculous, er...no, actually, there was no sublime - this was ridiculous from the outset, moving sometimes to the completely absurd.

In spite of myself, I found this to be hilarious dark comedy.

Elf: Buddy's Musical Christmas tells the story of Buddy the Elf, and his quest to reunite with the human father he never knew existed. While Buddy's sincerity and idealism are commonplace at the North Pole, these attributes are rejected in cynical New York City. But through song, dance, and relentless good cheer, Buddy rekindles the spirit of Christmas for the entire city