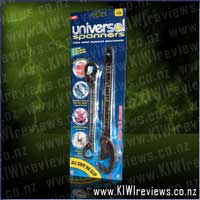 Universal Spanners have an impressive gripping mechanism; when the force applied increases the spanners grip tightens. Universal Spanners work analogous to rachet so is excellent for use on worn down heads pipes and plumbing fittings.

Features:
•  Universal Spanners adjust automatically no matter what the size, so no guess work and no trial and error
•  Will tackle every nut and bolt from 8mm all the way up to 32mm
•  Hold more securely than any ordinary spanner gripping in three places instead of just two
•  Simply turn in the direction of the spanner tip to tighten. Then to loosen, just turn it over - nothing could be easier

This product split our household with some loving it and others talking about all the design flaws it has. Personally i found the rough edges hard on my fingers with my rings and the "moving" bit of the spanners a bit loose and was left wondering if i would break them. They have been used on everything from the kitchen tap to the lawn mower and a bike and i must say they still haven't broken. They have replaced and old army box of spanners in the shed with the most common use for them being for opening the beer bottles at the end of a hard days work.

For many years I had a perfect set of spanners... a range of adjustables, a socket set and even a torque wrench... then a couple of years ago I made the mistake of storing them in the garage when I moved into a new house, and didn't realise until 2 months later when I finally got around to unpacking them that I had stored them right under a leak in the roof and they were all pretty much stuffed with rust. No amount of CRC could save them, and I was bereft. All that was usable was a now rusty set of fixed spanners, and they proved to be somewhat less than ideal many times.

So it was with some high degree of interest I gave these a go... after all, it seemed a little implausible to state that just two spanners could replace a whole set... yet that is indeed what they claimed. So, time to really test this marketing hype...

After testing it on a range of nuts and bolts, and even some larger techscrews, I was stunned. I couldn't fault them! They did everything they claimed to do, without any obvious flaws in design or performance. Their loose-jointed design allowed them to act almost like a rachet set, allowing for easy tightening of awkward pipefittings and bolts.

These appear to be quite sturdy... nothing I did managed to harm them in any obvious way or reduce their effectiveness perceptibly, buit I admit I was a little put off by how 'floppy' the heads were. Though this would actually be a benefit in some tight-spot situations, allowing the user to twist the handle allowing the head to 'flop open' and thus attach to the fitting, I can't help but feel that a spring-loaded head would be more 'right'... even though I can just as easily see how that would be detrimental to performance at times.

Overall, it's just one of those contraintuitive things... what actually is the best design just doesn't feel as 'right' as an inferiour design does. Once you get past that though, the functionality of these units is obvious, and will soon justify the purchase.

This is one of those gadgets that you never think you need, but if you have them, you find plenty of uses for them anyway.

Two universal spanners will replace almost the whole of my father's toolbox and for me - it means I can keep my entire toolbox in the draw of the kitchen along with the universal screwdriver. I can't think of anything else I need (other than the hammer I already have).

With the universal spanner, there is no fiddling and adjusting as one would with a normal adjustable - no slipping either, because the clever design grips the nut or bolt, meaning no more sheared nuts and bruised knuckles for me.

I love to keep life simple, and with this I have pretty much all I need in my toolkit.

Universal Spanners have an impressive gripping mechanism; when the force applied increases the spanners grip tightens. Universal Spanners work analogous to rachet so is excellent for use on worn down heads pipes and plumbing fittings.

Features:
•  Universal Spanners adjust automatically no matter what the size, so no ... more...