The Mirage Makers 2: The Shadow of Tyr review

ProdID: 2297 - The Mirage Makers 3: Song of the Shiver Barrens
Written by Glenda Larke 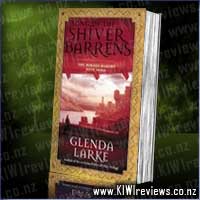 The Mirage Makers 3: Song of the Shiver Barrens product reviews

Ligea′s son, Arrant, leaves Tyrans for Kardiastan to take his place as Mirager-heir, while Ligea prepares to halt an insurrection. But Arrant′s skills as a Magoroth are dangerously inconsistent, and his father, Temellin, finds it difficult to communicate with this secretive young man he barely knows.

Arrant′s singular ability to communicate with his half-brother, Tarran - a part of the collective mind known as the Mirage Makers - leads them both towards the possibility of a tragic clash with the encroaching Ravage.

As Arrant′s enemies among the Magoroth plot to ruin his family and his future as heir, he begins to realise there is a greater mystery to solve if he is to prevail.

Arrant is on his own in a homeland he barely remembers with a father he has only met once, and somehow, he has to overcome his flawed magic to become Mirager-heir.

Add to that, the whole family of children trying to discredit him and taunt him into making a fatal mistake...

I enjoyed reading this final instalment of the Mirage Makers series because it focused almost exclusively on Arrant, a character who has made many mistakes but always had the best of intentions. He and his half-brother Tarran are adorable together, especially as Arrant begins to enter adolescence and Tarran constantly teases him about girls.

As the stakes increase, and the mirage looks like it may be about to disappear completely, it is Arrant's courage and honour that shines through. Ligea and her husband, Temellin, take a definite back seat in this story as the next generation ploughs ahead to try and save the day.

A satisfying conclusion to an excellent and intricately detailed story. Glenda Larke is a master telling epic fantasy with plenty of heart and real characters.

But Dad's heart is wonky, and sister Jess is an ice-queen. Then Harry lets slip that Helen's not actually who she thinks she ... more...