« One Touch Can Opener review 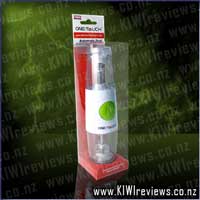 Seasons your meals and snacks speedily and easily with One Touch automatic dual-spice dispenser.

Features
•  Automatic, one touch of a button operation.
•  Can be used to grind other whole spices.
•  Sell through chamber lets you know when to refill.
•  Choice of coarse or fine grinding modes.
•  Easy to refill.
•  Attractive, streamlined two-in-one design.
•  Ideal for both indoor and outdoor use.
•  A great gift idea for the family chef.
•  Ideally suited for heavy-duty use in restaurants and bars.
•  Runs on AA-sized alkaline or rechargeable batteries.
•  Patented technology.

Well I never thought that I would by an electric salt and pepper grinder. I have always liked the manual variety. To my surprise I found this product extremely handy. It is easy to fill, and use just by pressing a button. The thing that impressed me most is that the product grinds the salt and pepper evenly and finely. This is ideal for baking, cooking and table use. The thing that I like the most is that there is no twisting involved and as a result I can use the mill with one hand instead of two while I am cooking.
All up I think every household should spend the $30 dollars and get one.

There is only so much you can say about salt and pepper but this is one of those products I have always dreamed about owning. It is easy to use, hold and refill. One thing I did notice with this was that you can only fill it to 80% of the canister but considering the size of them, you would need to use it excessively to run out within about a month. You can use either salt or pepper and simply turn it over to use the other one, meaning it will take up less space in any cupboard and kitchen.

Having a partner with arthritis, grip of many products is vital as to whether we keep them or get rid of them. As he can operate this product with ease, I am sure at anybody would be able too. My biggest concern about this product is the fact it is run on batteries. Anything with batteries normally tells you not to store them for long periods of time with them left in and this is one product that makes removing the batteries to store it, difficult to say the least. We tried to run it on energizer max batteries even though it states on the pack to use alkaline, it worked for a total of about 20 seconds. Once we replaced the batteries with the "correctly" stated batteries, I was impressed with how it worked. I doubt that we would be removing the batteries other than to replace them as we use salt and pepper a lot in everyday cooking.

As the cook of the household, a good spice dispenser is invaluable every night of the week. The problem is that I tend to use the shaker dispensers for salt, and apply the salt directly into the food while it cooks. This results in steam-induced clumping which often causes massive blockages of the holes. This is not only frustrating and time-consuming to fix, but has caused many a dent in the wall and salty wreckage on the floor, over the years. Thus, I have to admit I wasn't expecting to be assessing much more than the aerodynamic potential of this unit.

Disassembly of this unit was easy enough, as was the insertion of batteries. Didn't even need the manual. (And I didn't break anything in the process!) Filling the hoppers with peppercorns and seasalt was simplicity itself, and the see-through sides make it obvious when you are about to run out.

What impressed me the most about using this was that even when the inevitable steam-slush formed, it still managed to grind out usable salt due to the shape and variable apeture of it's grinder. Most pleasing, and most beneficial for the grinder's survival prospects. It's effectiveness was proven again with the peppercorns, as the ones I prefer are rather solid and hard to grind in basic grinders. This unit smashed them into tiny flakes with ease, though I could easily hear the motor having a hard time of it.

It's quite stylish and discrete when stored, and takes up virtually no space in the cupboard. It's not at all heavy, even when fully loaded, and most importantly, it's comfortable in your hand and easy to reach the button with your thumb no matter which way up you hold it.

Overall, this is a great tool. Perfect on the table for guest-dispensed spices, and also great in the kitchen for the chef's use. I plan to test this with other seed-based spices, and if it performs as well as I anticipate, I will probably be buying a couple more. At $15 each, they are an inexpensive investment in fine dining.

As with the other one-touch products, it was not hard to give a perfect ten score. What's not to love about it?

For a tadge under $30 you don't just get a salt grinder, but the pepper one as well. And what's more, you get a fantastic, stylish two-in-one design too. The mill is simple to fill and you know just when it is going to run out. A press of the button and you grind the salt; with a flick of the wrist and another press of the button, you get the pepper.

It is claimed that you can fill with other spices to grind over your food, but I have not tried that, and there is no reason why it would not work, unless you tried to wedge whole nutmegs into the chamber (which would not fit anyway, so I would not bother trying.
The real secret for me, is to add "Smoke and Spice's" manuka smoked sea salt instead of standard salt - the flavour is by far the best; but that, is another story.

A peppermill is just a peppermill, right? Well no. It might look impressive to have a 3 foot, wooden peppermill on the table, and then go around the table adding a twist to everyone's meal in the manner of those self-important waiters at cheap restaurants and pizzarias who want to give the illusions of grandeur but the functionality of a simple one-touch salt AND peppermill, in one package, is far more usable. In fact, you are more likely to get more comments.

Seasons your meals and snacks speedily and easily with One Touch automatic dual-spice dispenser.