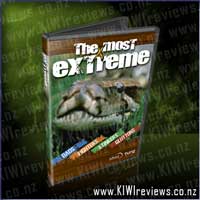 Made for Animal Planet, and broadcast around the world, the award winning THE MOST EXTREME series has received enthusiastic reviews and a world wide following.

Funny, intriguing and downright outrageous, THE MOST EXTREME takes an entirely new slant on the animal kingdom.

The world is full of amazing animals doing the most astounding things, so how would you choose the best of the best? THE MOST EXTREME takes a fun look at how the best (and worst) of our world stacks up against the animal kingdom.

It's much more than just a list of the top ten smelliest, or the strongest, or the weirdest. THE MOST EXTREME goes way further, comparing all kinds of human achievements with those of nature in the most graphic, gross and outrageous way possible.

This cool series is a fun, freaky frolic with lots of simple examples of connections between the animal world and the human world. Each episode has a countdown used to find out which of the top ten animals is the most extreme. I think the beginning of each of the 4 episodes on this disk was the best part because it had music and pictures that were so cool that I kept rewinding it again and again. The episodes also had interesting scenes that got my attention, and it had infomation that was easy to listen to. It didn't take long to get through each episode because there was only a short period of time in between each number of the countdown, and there were some animals that I already knew something about in some episodes, meaning that there was some new info that I didn't know about before. I'd so love to watch the rest of the series sometime soon, because this series is exciting, extrordanary, and very, very exteme.

Gallifrey. Planet of the Time Lords. The Doctor has finally come home, but not by choice.

Summoned by a vision from The Matrix, he is drawn into a web of Political intrigue and assassination. Nothing is quite what it seems, and in the shadows lurks his oldest and deadliest enemy...