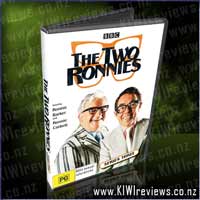 Ronnie Barker and Ronnie Corbett were an unlikely comedy team but their talents complemented each other perfectly in a series that would run for 16 years and become part of British television history.

This third series was broadcast in the UK from September 1973 to January 1974. It featured Pans People as regular guests and among the many highlights of the eight episodes were the Ecclesiastical Gossip and the Shouting in the Library sketches, Ronnie Barker's series of "How to..." public service films, Ronnie Corbett's audition as a continuity announcer, the incomparable country singers Jehosophat and Jones and a series of wonderful send-ups of 1970s television series including Star Trek, The Onedin Line, Upstairs Downstairs, Colditz and Jason King.

The Two Ronnies were a thoroughly British institution. The weekend's were never the same without them, the Christmas specials were something to look forward to - and the clever word-play in some areas was lost on a young child, which make watching these sketches again, something to be savoured.

The series was written by a Who's Who of British comedy, Ex-pythons, amongst the illustrious crew who penned everything, and starring the ever present Ronnies.

My favourite was always Ronnie Barker, who, in my opinion, was the greater comic genius than Corbett - which has been played out with some of the other Barker classics; and something my parents were happy to let me watch as a child - unlike many comedies now that rely on sexual innuendo and smut. This is safe to watch with your kids and hopefully introduce a new generation to fantastic comedy. Having watched this with my daughter, The Two Ronnies at least have one more new fan.

The Two Ronnies is a must in the collection of every fan of British comedy. You will not be disappointed

The third volume in the Wild South series ... more...