« Sins of the Father review 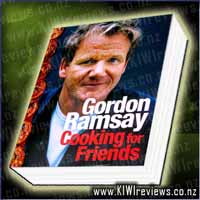 Away from the high-octane energy of the professional kitchen, Gordon's home is a relaxed family affair, where cooking is fun and everyone gets involved in preparing food for family and friends.

The food Gordon cooks here embodies his strongly held views: use in-season, fresh ingredients at their peak, support local producers and farmers' markets whenever possible, and celebrate our food culture and its many influences.

Full with over 100 of Gordon's best-loved versions of classic British dishes, which he loves to cook and eat with friends and family. Uncomplicated recipes, but with Gordon's remarkable feeling for flavour and his technical know-how.

It's not often I get to pick the brains of a world-class chef... OK... I *never* get the chance... but having a book like this on hand is pretty darn close.

Full of recipes that make me drool as I reasd them, then blush in embarassment when I realise what I am *actually* cooking for dinner... this is a reference book like no other. There is everything in here, from amazingly light entree soups right through hearty main courses of all ethnic origins, down to warm comfort-on-a-plate desserts, including how to make some really interesting toppings, such as the eye-catching ginger ice-cream. -yum-

If I *had* to pick just one recipe from here to be my 'hit pick'... I couldn't. There are just too many. If I was allowed to pick one from each category... I still couldn't! BUT... some of those fighting for top place would include the Alnwick Soup with it's big chunks of meat and veges in a light refreshing broth, the Thai-style fishcakes with sweet chilli sauce (who can't resist them?!) and perhaps the Peach, Raspberry and ginger crumble (though I would personally try it with strawberries instead, since I am not much of a berry fan). I would also have to include the Angus Beef Olives in the list too... simply because I have become a total fan of Angus Beef since I got the chance to try it some months back.

Overall... an outstanding addition to the library of anyone who thinks their cooking could use a bit of a nudge out into new territiry... but this book would easily have scored a full-10 if not for one slight annoyance... Gordon Ramsay is undoubtedly an awesome chef who brings power and passion to all he cooks... but let's face it, he's also a rank poser... and I would have preferred less pics of his mug, and more of the food itself.

Score: - pending -
Product reviews for listing 1818: The Kira Chronicles #2 - The Song of the Silvercades -  Written by K.S. Nikakis

Deep in the southern forests, the Tremen are being viciously attacked by their neighbours, the Shargh. As the death toll mounts, gold-eyed Kira, the ... more...