ProdID: 209 - Only You
Performed by Harry Connick, Jr. 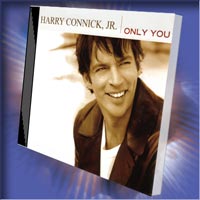 Only You product reviews

Harry Connick, Jr. is a man of many moods, all supremely musical. Look no further than his recent Columbia albums for proof.

After exploring the wonders of childhood on his 2001 Grammy ®-winning songs I Heard and the spirit of the Christmas via his recent blockbuster Harry for the Holidays, Connick now turns to the matter of romance on his new collection of ballads, Only You.

If you like soothing, smooth croon and jazz melodies, and enjoy listening to a master singer in action, you'll find this album to be a fine offering.

Overall, quite a pleasant album. I quite look forward to some nice weather so I can pipe it to the outdoor speakers, relax back on the seat and soak a few quiet, relaxing therms while I sip a cold one. Maybe even char a few lumps of flesh on the BBQ, if fate should allow me that much.

Franz Ignaz Beck, the greatest of Stamitz's pupils, led a colourful and eventful life. Fleeing Mannheim after fighting a duel with a jealous rival, he moved to Venice. After eloping with his patron's daughter, he finally ended up in France where he lived for nearly fifty years.

Beck's symphonies have long been admired for their inventiveness, startling use of bold harmonies and dramatic intensity. The most striking work in this set is ... more...