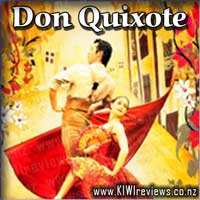 Disclosure StatementFULL DISCLOSURE: A number of units of this product have, at some time, been supplied to KIWIreviews by the company for the purposes of unbiased, independent reviews. No fee was accepted by KIWIreviews or the reviewers themselves - these are genuine, unpaid consumer reviews.
Available:
See Website

Don Quixote leaps to life in a riot of bright colours, music and fun in this story of the Don's final quest for adventure.

Starring Sir Jon Trimmer as The Don in his 50th year with the Royal New Zealand Ballet, Don Quixote combines a colourful cast of characters with the best of traditional classical ballet choreography and sparkling melodies from revered ballet composer Ludwig Minkus.

The story follows the confused and ageing Don, together with his young nephew Sancho, as they encounter the devious Gamache with his consort of rough and ready street dancers, the beautiful but feisty Kitri, her young (but poor) lover Basilio, Kitri's father - a pretentious cafť owner, and a tribe of wild gypsies.

A secret lover's tryst, a robbery, visions and dreams, and a celebratory wedding add excitement to this fun adventure. Don Quixote is one of the greatest comedic ballets of all time, so join the Royal New Zealand Ballet for this riotous family-friendly classic.

A love story, a comedy, a crime, and an old man's possibly last gamble for adventure... this was all "told" in a ballet that flirted with bold colour, and entranced its audience, even those, like me, who had never even heard of the story before. The essence of Spain was flaunted throughout, leaving you in no doubt just where this story took place, with waiters using tablecloths for "bull-fighting" displays, Sir Jon Trimmer's amazing use of the castanets in the wedding scene (I was seriously wishing this part had lasted far longer, as he really was incredible to listen to), the vivid displays of red, pink, and orange (all those really bold colours you see used in Flamenco dance costumes), and even snippets of the music blended in to the rest of the beautiful score.
This is only the 2nd ballet I have seen since I was a child (the first being the spectacular Festival of Russian Ballet (2007)", and I had been worried I'd not be able to follow along, especially as I didn't know the story and didn't even get a chance to glance at my hastily grabbed programme, without any narration. A needless worry, it turned out, as this ballet was so well performed that both my Mum and I (this made for a GREAT birthday gift! LOL!) were able to follow along and work out the story as we went. The only thing we had problems with, was that there was so much going on on-stage, that we just didn't know where to look. You watch one part of the stage, then realise you're missing out on interesting bits happening over the other side. It was chaos of a sort, but of a thoroughly enjoyable kind.
On the comedy side of things, there was the Cafe Owner, Lorenzo, who was constantly having trouble keeping his beloved daughter away from Basilio, the delivery boy. There were many in the audience who chuckled as he gave an excellent example of an exasperated father, who's wilful child just will NOT do as she's told. Then there was the gaudy Gamache with his extremely life-like dog who had a tendency to attack the cafe's customers or look up their skirts (the DOG, that is, not Gamache!)... this little dog was extremely well done, and I'm now seriously wondering where can I get one please??!!!! Hehehe!! Added to these, was also Sir Trimmer's fantastic portrayal of the slightly unhinged, doddering old "Don Quixote" who liked to gallop about the stage on his mop "horse", looking awfully like a lost World War II Pilot, much to his poor nephew's embarrassment!
The ballet was filled with the grace, effortless-seeming lifts, strength and power (watching "Kitri" spinning so many times without stopping that I lost count, was jaw-dropping. I am in awe of these amazing talented dancers... and I still can't get over just how their ankles don't give out on them with those spins! Owch!!), that one would expect to see in a professional performance, and had me wanting to watch it over and over again. Whether new to the world of Ballet like myself, or a fan for years, "Don Quixote" is indeed a show that can be classed as a "MUST-SEE"!

After 300 years of witches living in secrecy, mysterious attacks have both threatened their survival and forced "gifted" girls to attend a school in New Orleans for protection. Wrapped in the turmoil is new arrival, Zoe, who harbors her own terrifying secret. Alarmed by the recent aggression, Fiona, the Supreme, is determined to protect the Coven at any cost.