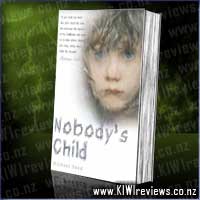 Disclosure StatementFULL DISCLOSURE: A number of units of this product have, at some time, been supplied to KIWIreviews by the company for the purposes of unbiased, independent reviews. No fee was accepted by KIWIreviews or the reviewers themselves - these are genuine, unpaid consumer reviews.
Available:
In Good Bookstores

Michael Seed 's childhood was nothing but a daily ordeal of unspeakable neglect, misery, and abuse from a father whose tyranny of fear stole Michael's formative years from him and drove Michael's mother to suicide. After years of silence, he now feels ready to tell a story that, though shockingly painful, is a testament to one human's remarkable ability to triumph over the most appalling of circumstances. Living with his adoptive parents, life for Michael was hell from the start. Long before his school days, the only lesson he learned was to try and avoid being noticed by his alcoholic father.
More often than not, though, his dad would find time to ensure that both Michael and his mother felt his wrath together. Then, one awful night, Michael realized that the abuse was escalating to another level when his father began the sexual abuse that would continue for years. The abuse did not stop at home.
Once he began school, Michael once again fell victim to terrible bullying and a teacher who violated him repeatedly. Michael, it seemed, was destined for a life of inescapable misery. Yet, despite the horror of these years, Michael was ultimately saved by his own will to live and which inspired him to move on and seek a better life. This is the remarkable story of an individual who, against all the odds, managed to preserve his own dignity and finally escape the horrors of a stolen childhood.

Nobody's Child written by Friar Michael Seed is a not a read for the sensitive, nor the faint hearted. I would strongly suggest if you have encountered abuse as a child that this will be difficult and somewhat heart wrenching to read.

The worst thing about this book is that it is not fiction, and I so so so wish that it was. Michael endured the most awful, horrible, abusive childhood, and one that no child should ever have to endure.

From starvation to neglect, neglect to violence, being bullied and treated unfairly - this is a shocking read, that you want to put down, but somehow, just cannot, as you really hope and pray that this child will somehow, have someone save him.

Until Michael discovered the Church, he never knew true happiness or felt real love. It was then that he began to realise that it was not him that had caused these things to happen. He subsequently went on to become a Friar.

What I took away from this book was that the human spirit is nothing short of amazing. Despite everything being against him - Michael did not follow that same path. It also reinforced to me to treat my children with love, respect, and keep them safe - always!

This is a slightly depressing read if i am honest - but I did really enjoy it - and think it stands as a testament to the power of yourself.

'Nobody's Child' by Friar Michael Seed is a sad and strangely compelling autobiography about his horrible childhood. Raised in Manchester, England, Michael was forced to starve for days, whilst being beaten by his father. His mother, severely depressed, would go days without speaking to Michael, and she would also be beaten by Michael's father. Michael was also bullied at school, causing him to develop dyslexia, and stunt his reading and arithmetic skills. Extended members of Michaels family also abused him and forced him to sink further into a depression at the young age of 10. Until Michael discovered the Church at the age of 17, he never knew true happiness or felt real love.
'Nobody's Child' is an easy read, but this is not for the faint hearted as it can leave you feeling sad. However, it is an interesting look at how Michael overcame his childhood and turned his life around, sacrificing so much to help people and asking nothing in return. His determination and spirit is something to be admired.
In saying that, however, I find I cannot like or dislike this book. The word 'neutral' comes to mind. It is interesting and it is thought-provoking, but at the same time is it depressing, and leaves you feeling down.