ProdID: 1913 - Dragonlance: Dragons of Autumn Twilight
Directed by Will Meugniot 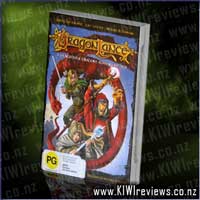 Dragons, magic, swords- what more could you want in a fantasy animated movie? Guess that depends on whether you're a kid or an adult watching this. Although kids (including a few of the adult-sized ones, I'm guessing) would more than likely find it enthralling (my 8-year old son certainly did- even after watching it several times so far!), it's not the greatest by adult standards. Bearable, maybe even somewhat enjoyable, but certainly not great.
In my teens, I'd read many of the books co-authored by Margaret Weis and Tracy Hickman and rather enjoyed most of them, but, unfortunately, I'd never gotten round to reading the books they'd written that this movie is based on. However, I did at least enjoy the movie enough to now want to find the original book series and give them a go as I've found these days that, with movies based on books, the written version usually tends to be a lot more interesting.
The voice talents of Lucy Lawless and Keifer Sutherland were pretty easy to pick out, but not quite so easy to spot, was Michael Rosenbaum - aka 'Lex Luther' in "Smallville". I'm kind of curious to see what the sequel would be like (my son's already pestering me to get it if/when it comes out), but as sequels in general are usually not as good as the first movie of the series, I don't hold out much hope for a decent continuation of this story.

Things aren't going well for John McClane: his marriage is breaking up, he's been suspended from the force and now the brother of Hans Gruber, the German terrorist he threw off a building a few years back, is threatening to blow up a school if McClane doesn't run around the city solving his demeaning and dangerous puzzles.

With the help of Zeus, a Harlem electrician, McClane discovers Gruber's plot to distract the NYPD while he clears the federal bank of billions of dollars of gold.