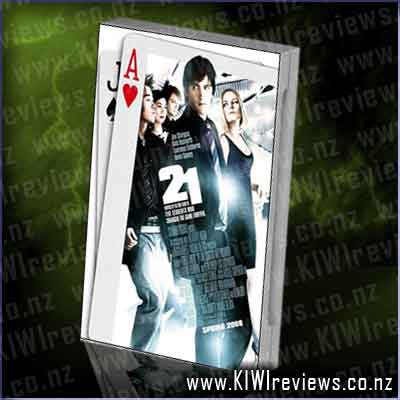 Disclosure StatementFULL DISCLOSURE: A number of units of this product have, at some time, been supplied to KIWIreviews by the company for the purposes of unbiased, independent reviews. No fee was accepted by KIWIreviews or the reviewers themselves - these are genuine, unpaid consumer reviews.
Available:
In Cinemas

"21" is inspired by the true story of the very brightest young minds in the country - and how they took Vegas for millions.

Ben Campbell (Jim Sturgess) is a shy, brilliant M.I.T. student who - needing to pay school tuition - finds the answers in the cards. He is recruited to join a group of the school's most gifted students that heads to Vegas every weekend armed with fake identities and the know-how to turn the odds at blackjack in their favor. With unorthodox math professor and stats genius Micky Rosa (Kevin Spacey) leading the way, they've cracked the code.

By counting cards and employing an intricate system of signals, the team can beat the casinos big time. Seduced by the money, the Vegas lifestyle, and by his smart and sexy teammate, Jill Taylor (Kate Bosworth), Ben begins to push the limits. Though counting cards isn't illegal, the stakes are high, and the challenge becomes not only keeping the numbers straight, but staying one step ahead of the casinos' menacing enforcer: Cole Williams (Laurence Fishburne).

Kevin Spacey can do no wrong. Let's just go out and say that to begin with. The actor can fill any film with suspense. I was apprehensive about seeing this film as it was based on card-counting, so the premise seemed quite thin, but Kevin Spacey gave me a reason to give it a go.

That being said and done, once I actually had purchased the dvd, and the "should I spend the money?" question had become obsolete, I became curious and watched it as soon as I returned home. Card-counting has often been portrayed in films, but it has never really been spoken about or explained in any sort of depth.

This film goes into a little bit of depth, but not so much as to teach card-counting, but to show how elaborate ones plan must be to successfully do it. The act of card-counting is portrayed as simple mathematics (for mathematicians at least), but the difficulty is in not getting caught. Laurence Fishbourne plays the role of the managing security personnel for the casinos, who is attempting to catch these high-rollers.

For a movie, based on a plot that largely involves mathematics and counting, 21 proved to be full of excitement and action. I thoroughly enjoyed this film.

A DEA agent and a naval intelligence officer find themselves on the run after a botched attempt to infiltrate a drug cartel. While fleeing, they learn the secret of their shaky alliance: Neither knew that the other was an undercover agent.