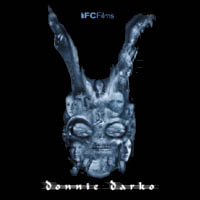 As he tries to figure out why he survived and tries to deal with people in his town, like the school bully, his conservative health teacher, and a self-help guru, Frank continues to turn up in Donnies mind, causing him to commit various acts of violence.

What on earth?
Those were my thoughts after watching this movie. It had me completely hornswaggled throughout the viewing. It switched from one point to the other, switching timelines, switching from reality to insanity. It really had me confused. By the end of the movie, it had made a little bit of sense, but overall it was still incredibly obtuse and perplexing.

Escaping an unfortunate death thanks to Frank, a weird rabbit furry, Donnie Darko receives a warning about the impending end of the world. The film follows this boy as he continues his life after this event, and his subsequent interactions with Frank. Quite an odd film, with a very twisted plot, in content, temporally, and mentally.

I enjoyed this film, but it really is a film that you need to watch multiple times. And realistically, I didn't want to. It was interesting, but the hype was really over the top, and my expectations weren't met. It was just a little bit too convoluted for me. Whilst I have this on DVD, I have only watched this twice, and its just sitting there gathering dust now.

It certainly made me think. It kept my mind working throughout the entire film, but it failed to make me love it.

Donnie Darko was one of those films that gripped me most of the way through simply because I was thinking "What on earth is going on here?" and then at the end I thought "What just happened?"

Thinking back over the plot and putting the pieces together, I was gradually able to make sense of the dark, twisted storyline... and while it was strangely satisfying to finally work out what it all meant, I must admit, the realization left me feeling a bit depressed.

From a technical point of view, this is a very good film. Special effects near the beginning were possibly a little cheesy, but not heavily relied on, so they did not detract too much. The actors all fitted beautifully into the puzzle; even Drew Barrymore, who I would have expected to stick out uncomfortably, had a brilliant line about "Cellar Door" being the most beautiful two words in the English Language. Jake Gyllenhaal brought an enchanting, and yet disturbing, madness to the film - guiding us through the inner world of a boy who is either completely insane, or perhaps just sees more truth than anyone else.

I enjoyed Donnie Darko for the cult classic that it is, and I can fully understand why so many people love this film. I would highly recommend it to people who like twisted or dark films, though I suspect it would probably give children nightmares (that Rabbit gave me nightmares!)

It's difficult to tell whether Donnie Darko is experiencing hallucinations as a result of paranoid schizophrenia and not taking his medication, or if he's just unfortunate enough to be followed around by a large, scary rabbit which no one else can see.

Jake Gyllenhaal, as Donnie, is relatively easy to relate to, and his acting, along with the very appropriate selection of music in the soundtrack, helps to create an incredibly powerful atmosphere. There is always a sense that something is building up - from the very beginning right through to the final minutes - so we become absorbed in trying to work out what it is, and, if we've worked it out, in trying to figure out what will happen next. (Keeping track of the details is vital).

This film would be worth watching for the atmosphere alone; however, there's also a great plot to go with it - complex but, combined with elements such as excellent acting from the cast, not quite complex enough to get viewers lost. Even if you're not into science fiction or mystery, it's hard not to care about Donnie. 'Donnie Darko' is perfect for those who like films which keep them thinking.

This movie is one you really need to watch twice, just to make sure you really DID see some of the messed up stuff in there. With a plot that twists around itself and comes back out the other side of real, it all makes sense about an hour after the movie has finished and your brain has put all the bits back together, a bit like 'Pulp Fiction' by Quentin Tarantino.

Not a movie you stick on for background noise, this one has to be really watched due to it's looping storyline that is all explained at the end. This movie would have to have one of the most convoluted storylines I have seen in ages, really keeps you interested until something better comes up.

Be sure to stock up on the popcorn and fizzy before you sit down, because once you press play, you had better not miss anything or you'll be totally lost until you rewind and watch it all over again.