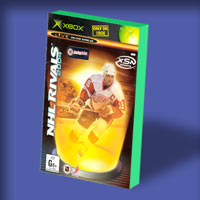 •  Jump right into the heart of the action with Instant Rivalry

•  Online play with up to six Xbox systems in regulation NHL or Pick-Up games.

•  Lead your team to victory and raise the coveted Stanley Cup.

•  Advanced sound and graphics deliver the full intensity of hockey.

This game can get you quite excited as far as sports games go. The fights, graphics and general play can keep you entertained for a decent amount of time. At the beginning it can be quite hard to score goals until you get the hang of it. The fighting is fun and helps to add to the fun of it and is that little bit extra that some games lack. There are a few things that aren't that good with this game and that is that you can put up the statistics of your players straight away, this makes them hard to beat and makes it lack the same challenge, also that it is very easy to get sick of this game. All over it is quite good but I suggest that you hire it first to try it before you buy it.

This is the most realistic hockey game, as far as hockey games go, I have seen or played. The graphics are really very good and this allows more realistic gameplay. Unfortunately I have played NHL games on Sega (back in the day) and the controls seem very similar, obviously far more advanced but still a little dissapointing.

It is an exciting game for a day or two, maybe the best option is hiring it out, but it seems to get repetetive and a little boring when played for long periods of time. Maybe it's because I'm not a commited hockey fan that it becomes dull, real fans may see other aspects of the game which an uneducated player may overlook.

I personaly found it fun for a day as I liked the fights and smashes, but I think its more a game for true NHL fans.

What IS the big appeal of getting dressed up in a mountain of padding and body armour, grabbing a stick and a circle of plastic, strapping steels blades to your boots and having a session of semi-controlled chaos on ice slapping the puck around? Never really seem much point to it, but there are those that would consider such words to be heresy. For them, the religion of Ice Hockey runs through them like fire during play-off season.

To those people, I ask forgiveness for my lack of faith, but whether it's on the ice, or on screen, I don't get it. I played this game for about 7 hours solid and I still don't get it. However, despite my inability to grasp the concept of pleasure while slapping ice and being slammed into walls, the floor, the goal cage and other players, I couldn't stop playing! It hooked me in a strange way I have yet to understand. I didn't play it because I liked it, I played it because I was trying to understand the mania that overcomes otherwise sane, rational people when they play these games.

With a reasonable standard of graphics, some great sounds, and the wonderfully intuitive interface that seems to be a common standard amongst games developed with Microsoft Game Studios, this was actually quite an interesting way to blow away an evening.

Overall, not my kettle of gerbils at all, but I begin to see why it proves so popular with the sports crowd. If you like Ice Hockey games, you'll certainly get your money's worth from this one. Another good'un.

In the curious village of St. Mystere, townsfolk speak to each other in riddles, lock their doors with sliding puzzles and hide their secrets within brainteasers. When a wealthy baron passes away, his will reveals an elusive treasure hidden someplace inside the village. Now it's up to Professor Layton to untangle St. Mystere's riddles and puzzles, ... more...