« Into a Dark Realm review 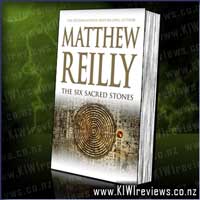 The End Of The World Is Here
Unlocking the secret of the Seven Ancient Wonders was only the beginning. The world is in mortal danger.

SIX FABLED STONES
For Jack West Junior and his loyal team of heroes, the challenge now is to set six legendary diamonds known as "The Pillars" in place at six ancient sites around the world before the deadline for global destruction arrives. The locations of these sites, however can only be revealed by the fabled Six Sacred Stones.

AN EPIC MISSION
With only the riddles of ancient writers to guide them, and time rapidly running out, Jack and his team must fight their way past traps, labyrinths and a host of deadly enemies - knowing that this time they cannot, will not, must not fail.

This definitely tops the charts for an MR novel so far.

It turns out that Jack West Jr.'s Adventures with the capstone in Seven Ancient Wonders was just the beginning of this telling tale. What will happen with Fuzzy, Pooh Bear, Huntsman, Wizard, Zoe, and of course, the ever-loveable Lily?

Now, I'm no story spoiler, and I'm not going to start now, but this tale of adventure and heroism, traditional to MR's works, doesn't end here. And this book leaves you with your heart literally stuck in your throat. Six Sacred Stones hasn't even been released on the NZ shelves yet, and I am gagging for the sequel already!

The timeline in this book is the main questionable item, especially with the flights of the Halicarnassus around the world to various locations. I'm no pilot, but it certainly seems a little questionable to me.

Everything else in this book, no matter how unrealistic-sounding, still has potential to be an (albeit farfetched sounding) possibility. At least, in my mind.

If you have read, and enjoyed any Matthew Reilly Books in the past, you will certainly enjoy this one, HOWEVER, DO NOT READ THIS BOOK BEFORE READING Seven Ancient Wonders. Trust me on this.