The Tide Lords #2 - The Gods Of Amyrantha review 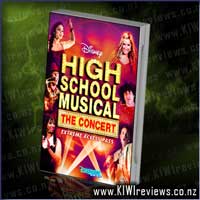 Be a part of an incredible concert event as the worldwide phenomenon goes extreme! High School Musical: The Concert invites you behind the scenes and puts you in the middle of the action with a spectacular "Extreme Access Pass".

Step out of the audience and jump onstage with Corbin Bleu, Monique Coleman, Vanessa Hudgens, Drew Seeley, Ashley Tisdale and more of the cast of the award-winning hit movie High School Musical as they perform their chart-topping songs in this sensational DVD.

Bursting with Concert Extras, it includes an amazing interactive feature that puts you in the director's chair and lets you produce your own version of the concert. Plus, Lucas Grabeel takes you backstage to meet the cast.
High School Musical: The Concert is an experience you'll never forget.

The movie was thoroughly enjoyable, especially for one like me who was brought up with musicals of all kinds, so of course it was a must to check out the concert version of High School Musical. Soon I was happily singing along (with the windows shut and no-one else home- no point in ruining anyone else's hearing!! Lol!!) to all the songs I'd enjoyed with the movie, along with a few extras that were concert specials. It was interesting watching the snippets they included of interviews with members of the cast as well- getting to see a little bit of the actual people, rather than just the characters they played.
The bonus features were mostly enjoyable as well, especially the On The Road section (rather them and not me with a day like that, every day for weeks!! Absolutely crazy!), and the songs performed by Jordan Pruitt, who opened the concert for them. I will admit though that I found it hard to figure out how to do the U Direct interactive section, but that was only a minor "glitch". Overall: fun to listen to, ok to watch, and good to have around if you've got kids under 13.