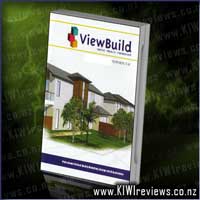 Turn your 2d building plans, blueprints or even rough drawings into a fully interactive virtual reality model of your construction project.

Visualise your ideas and your plans. ViewBuild Professional is suitable for residential, commercial and industrial construction projects.

Includes hundreds of context objects and a construction materials library that you can extend with your own digital camera. Explore shadow mapping in any country of the world and produce high-resolution output images for printed 'artists impressions'.

After playing with the basic version previously and finding it a heck of a steep learning curve, I wasn't too sure if I was going to be able to drive this beastie... so I sat down with the tutorial DVD and the help file, and spent a few weeks going through it over and over... this gave me a headache, but also a great grounding in how the programme works.

So, with a renewed sense of empowerment, I opened a previously built model file, I dived right in to the new features... and promptly got lost.

So, back to my copious notes, and after a few more minutes of head-scratching, and a few symbolic-logic doodles to try and figure out the 'wheres and whyfors' of things, I was soon back to building.

Basically, this version is a few steps up from the other version, with some added enhancements, naturally. The major enhancement is the cluster of animation tools... primary amongst them the Path Tool and it's associated animation features. These allow you to take your models into the 4th dimension, time. For example... take a model of a car, add a motion path along the road and into the garage... but hang on, isn't there a door in the way?

So, you set a path point located at the end of the driveway, and write a little action script that pauses the motion of the car long enough to run another little script that animates the door to swing up and open. When the pause is over, the car resumes it's motion into the now open garage. Want to get really fancy? Set the final point of the car's path as an action script trigger to run an animation of the door closing again. This took quite a bit of trial and error, and a few handfuls of pulled out hair (-ouch-) to figure out, but by the end of it I had a nifty little script. I was then able to enhance things by adding an external light to the house that was triggered in the door-opening script, so that as the car pulled up, the lights came on and then the door started to open.

After that, I had a lot of fun... making little animations of planes flying low overhead and dropping assorted objects, (yes, including kitchen sinks

), traffic intersections with lights that changed as cars approached... that kind of thing. Quite basic, but lots of fun.

However, this is where my biggest gripe with the programme also revealed itself... You see, the object library comes with some pre-defined cars, one of which I selected to use in animations... the problem was that as soon as I 'attached' it to a motion path... it started to travel SIDEWAYS! The car's axes were aligned such that the motion path ran through the doors, rather than the hood-to-boot axis. Despite much adjusting of the object, including using all of the inbuilt mirror/flip axis tools... in the end I had to export the object as a DXF mesh and do some nasty editting work to re-align the object so that it moved correctly.

One of the other 'extras' is the landscaping 'contour' tools, which allow you to adjust the land heights and contours. This is quite a stunning tool, but I admit I couldn't really get used to using it, so ended up making only minor use of it to create gentle slopes that didn't intersect with buildings at all.

Another major feature is the hugely expanded object and texture libraries... all of which can be expanded and enhanced by your own efforts... a majorly useful feature, well worth the extra $80.00 if nothing else is. The extra resolution you can output is another biggie, but let's face it... even the 'sketch' version saves out some pretty high-res images that are suitable for a number of uses.

Overall, this is by far the better package, but it's extra features requires some very intense learning... what you gain in features you lose in ease of use so for me it pretty much evened out as good as the other version. However, with a new 'super' version on the horizon, this is looking to become the 'entry level' version anyways, so you may as well get started on this one.

Strata Foto 3D CX lets you use a standard digital camera to capture real-world objects as fully textured 3D models. Its ideal for difficult to model objects like organic shapes, soft forms and hand made items.