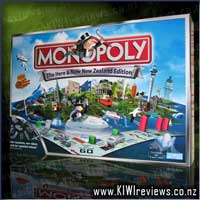 What would NZ Monopoly be like if it were invented today...?

New Zealand has changed over the last few decades. This special anniversary edition celebrates 21 years of NZ's favourite boardgame, with a modern day equivalent that was voted and chosen by New Zealanders.

Choose from a range of new tokens, including a mobile phone, jandals, sheep or even a jar of Vegemite!

Rents have skyrocketed all over the country, and you can build property in places like the Waitomo Caves, Cathedral Square or next to the Ohakune Carrot.

Play to win, New Zealand... in millions of dollars, not just hundreds!

I have kind of fond memories of playing Monopoly as a child with various family friends, some friends being a lot more competitive than others so it was almost like a war zone. When my children were finally old enough to be able to play a game that takes a bit of time and not lose the various components I went looking for a good version of Monopoly and then saw this one and thought it would be perfect.

It is great seeing the kiwi icons to play with and the names of the properties on the board all being familiar kiwi names but the funniest part of the game was how much the properties cost, inflation was huge compared to the basic game I used to play way back when.

The artwork is great. My children learnt one thing really fast, if you play Monopoly with mum then make sure you buy the properties as soon as you land on them (a legacy of playing with friends whose parents are in real estate) so that mum can't buy the whole board and make it hard for the kids to get money.

If you can get over the price of the properties being a few million instead of a few Monopoly dollars and you can pronounce the names (it can be a bit tricky for non kiwis to say the kiwi names) then this game is great for a family get together.

I recently bought this for my daughter. She had the Monopoly Junior game from when she was little but now she is 11 it is a little young for her. I hadn't played monopoly since I was younger so it was a bit of a blast from the past but not as this version is so much different from the original. We tossed up whether to get this one or the electronic one with the credit card and this one won.

The little game pieces are so cool, I like how they are NZ themed Kiwiana. My daughter will always use the mobile phone whereas I like the jandals. Still the same great quality though made out of a metal rather than plastic. The little marmite jar is super cute!! As there is only 3 of us everyone can generally get the play piece they want.

The first thing that got me was the sheer denominations of money you use in the game with the biggest note being worth a whopping 5 million!! As such the properties are priced quite high as well as the apartments, and boy if you land on someone's property you get stung quite a lot. I suppose the property prices reflect the change in how much properties are valued at these days, but I think I would prefer to play with smaller money still.

I played a game with my daughter last night and I didn't know that you can mortgage properties if you run out of money and pay it back as you collect more money. By the end of the game my daughter had a mortgage on all her properties and still no money left. This meant the game went on a lot longer than I had expected when she asked me to sit down and have a game with her after dinner.

The thing that kept me on a winning streak against her was that she wasn't really getting the point of buying the most valuable properties to make the most money, instead buying the ones that appealed to her most like Mount Maunganui and the Ohakune Carrot. She more went for the cool factor whether it was somewhere she had been to or somewhere she thought looked interesting. Worked in my favour though.

I've never been the hugest fan of monopoly; we normally play the "put the fines in free parking" rule to speed the game up a bit, but I bought my partner this edition for a present as he loves the game more than I! At first I was loving the updated place names and new tokens (but why Vegemite instead of Marmite???) and that was fine; made the game a bit more updated and exciting.

The new monetary denominations had me fooled though! I know inflations gone up, but these huge amounts didn't seem to have the same "playability". It is a lot easier for kids to try and work out money in 10s and 100s rather than 100,000s and 1,000,00s and I think this also put me off.

If you're already a monopoly fan you'll be fine, if you want to introduce younger kids to the game, I'd stick with the original. In fact, buy this one, keep it sealed in the attic and you might get a good price for it on E-bay in twenty years time!

Monopoly is one of my fondest board game memories of my childhood so when I felt my daughter was old enough for the adult version I bought the New Zealand here and now edition. I got it on special so it was a pretty good price but Monopoly still remains a fairly expensive board game in comparison to other board games.

This really is fun for the whole family but I would recommend it for children over 6 as the money denominations are quite large. I actually wasn't a fan of the larger sums of money but it does reflect that society has changed such the original. The modern twist is great with things that the children can associate with such as Kiwifruit 360 and the Ohakune Carrot as the properties rather than street names that they would not know of.

The playing pieces are also a slice of kiwiania with a marmite jar, a sheep, and a jandal - it really is a New Zealand twist on the game. The rules are pretty much the same as the original from what I can remember and are pretty easy to pick up on for those who have never played before. I like the twist where you can now mortgage your properties.

Everyone knows Monopoly and over the years the makers of Monopoly have put out a range of different variants that build on the same classic game. "The Here & Now New Zealand Edition" is a hybrid, being both an update of the classic New Zealand edition that had Queen Street and Lampton Quay as the pieces of prime real estate (or dark blues), and also part of the "Here & Now" family that has dealt with inflation by increasing the lower denomination from $1 to $10K in order to make it easier to pay those insanely high rents.

Like the original New Zealand Edition, the new version features some familiar place names, but this time instead of sticking to street names, the properties are grouped by type and were voted for by the New Zealand public. For example the browns are now iconic town markers - the Te Puke Kiwifruit and the Ohakune Carrot, the oranges are Mt Cook, Milford Sound and Fox Glacier, and the prime real estate of the dark blues are Rangitoto and the Pukekura Park Festival of Lights (although I'm not entirely sure how these two are connected). The movers have also been updated with Kiwi favourites such as a surf board, a pair of jandals and a Holden Ute replacing the roller skate, the race car and the thimble. There is also a jar of Vegemite but why that's there instead of Marmite is anybodies guess.

There are a few new rules for the Here & Now variant, but overall anyone familiar with the original (and really who isn't?) should have no trouble picking this game up. The kiwiana flavour to it may not be to everyone's tastes, but it's an enjoyable enough way to waste away a lazy Sunday afternoon.

I love Monopoly and in fact collect Monopoly.

I brought this one on special and it came with a bonus pack with different game pieces.

I play Monopoly so much that there is no thought into the money and rents, etc. But with this new one I had to really think about it all as all the prices are much higher than in previous games, kind of cool though, something different :)

I have always loved Monopoly in all it's various incarnations, and though I have a vague rememberance of a previous NZ version of the game, but admit that if I ever played it, it must have been only once and it is lost in the crowd of other Monopoly games I have played.

However, this version will stand out because it is the first one that has any connection to the modern economic situation... though I doubt anyone picks up $2m per week in pay, outside of the Governmental and Multinational Conglomerate sectors.

It does my heart proud to see the new range of high-profile regional landmarks, both locally and nationally, and even internationally, famous. I was also surprised that the oft-maligned "The Square" in Palmerston North made it onto the board... especially as the picture used is no longer current, due to massive renovations of the grounds and clocktower itself. Talk about timing!

Overall, other than the new board locations, this game is identical in all important aspects with the other 'Here & Now' editions so if you have to choose one edition, get this one.

If you have an older version, it could be time to tuck it away to collect dust in peace... update to this new one, and get the kids involved, help spread the passion to a new generation or two.

All the cute fun of the little blue cartoon and movie classic characters comes in family friendly form with The Smurfs Dance Party for the Nintendo Wii.

With more than 20 child-friendly songs that all come with easy-to-learn dance moves, the game is aimed at the kids and lets them dance along with characters such as Papa Smurf, Smurfette and Clumsy Smurf. The dance moves have all been choreographed by real life dance experts. But the ... more...