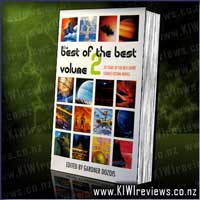 The Best of the Best - Volume 2 product reviews

For more than 20 years, The Year's Best Science Fiction has been recognised as the best collection of short sci-fi writing in the universe and an essential resource for every sci-fi fan.

In 2005 the original Best of the Best collected the finest short stories from that series and became a benchmark in the SF field. Now, for the first time ever, Hugo Award-winning editor Gardner Dozois sifts through hundreds of stories and dozens of authors who have gone on to become some of the most esteemed practitioners of the form, to bring readers the ultimate anthology of short sci-fi novels from his legendary series.

I love anthologies... they give me a chance to explore a wide range of styles and stories in a relatively short period of time. A bit like dining at a Dim Sum bar really...

In this collection are some of my favourite authors, such as Greg Egan, Ian McDonald, Michael Swanwick and Ursula K. LeGuin. However of all of the stories included, a couple really stood out for me...

Tendeleo's Story was my hit pic, as it is set in a world where earth is being consumed and transformed by Chaga, nanofactors from the deepest reaches of space, in a nebula that was once thought to be stellar matter, but turns out to be a huge morass of nanofactors larger than our entire solar system. He has written at least titles that are also based in this world, both of which I own and thoroughly enjoied reading.

Turquoise Days was another winner for me, with a biological counterpart to the whole nano paradigm, the Pattern Jugglers. These are an aquatic-based biological storage system that are amazingly complex, in that they are actually an entire ecosystem, acting in concert. I was somewhat reminded of one of the creatures in Arthur C. Clarke's "Rama" stories, a sentient plantform that was the 'queen' of a hivemind of motile creatures. I loved some of the technology in use within the story, and the way the society had chosen to minimise the impact of technology on their lifestyle, even though they relied on it to survive.

The Hemingway Hoax was also one that had my mind in a twist. I loved the whole time-paradox aspect of it, but I found some of it to be quite hard to follow. However, I know that this short story went on to become quite a famous piece of work by Haldeman, and was one of the stories I never got around to reading, but the buzz about it drew my attention to this author, and I have enjoyed many of his other works. it was a real pleasure to finally get a chance to see what all the hoopla was about. :)

Overall, any sci-fi buff is going to want this on their shelves. Seriously, anthologies of this calibre are well worth the ticket price, and should be sought after. If you don't have it, you should get it. Can't find it? Not surprised, I would estimate it would fly off shelves, but keep your eyes peeled at local quality 2nd hand bookstores, as the stories won't be to a casual reader's tastes, so should make an appearance on the bargain shelves sooner or later, and being hardback will be durable enough to survive the round trip.

Geronimo Stilton has been selected by the mayor to give a special driving demonstration, but his license has expired. He has only a week to relearn everything to pass the test for a new one. Little does he know that his lessons will introduce him to a talking robot car.