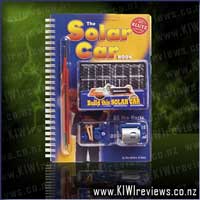 The Solar Car book is full of illuminating solar science facts and comes with everything you need to build a cool solar-powered racecar: wheels, axles, motors, wires and a genuine one-volt solar cell. No glue, no nails, no tape and (best of all) no batteries required. Build this car today and it will run forever, thanks to that big battery in the sky.

I have always enjoyed building things, and it seems my young son has inherited the constructor bug with a vengence. After building sitting down and building some lego Bionicles together, and then some K'Nex models all on his own, I thought it would be interesting to see how he coped with this... it says "Ages 8+" but he's pretty smart for a 7 year old (if I do say so my proud-daddy self

Since it requires the brief use of a sharp knife, firstly to separate the body plate from the book, and then to chop one of the 2 supplied straws (the other is a spare, just in case...) into small spacer pieces, I did those for him. No point in needlessly risking his skin's integrity.

After that, it was a case of fairly simply step-by-step assembly. He plowed into it with great glee, and dexterity, and in a matter of a few minutes has assembled the car quite successfully. I tidied it up a bit after he had finished, by rerouting the wires through the surplus holes in the card-body, so they didn't catch on anything, and then we tok it outside for a test drive.

Unfortunately, being the height of winter here in NZ, the sun is weak, and was quite low in the sky by 3:30pm... so while the car was sitting flat it wasn't getting even close to enough solar rays to run it. The only way we could get the drive-wheel to spin was to pick it up and aim's it's cell directly at the sun. This at least proved that it worked, and worked well.

Overall, I would say that a clever 6 year old would be able to do this easily, the instructions are so clear and easy to follow. A small amount of preparation help from an adult, and they shouldn't have any serious issues at all. Possibly a little expensive at first glance, you need to consider that solar cells aren't cheap... and the cheap ones are usually utterly useless... so you can't just pinch one out of a garden light you picked up from The Warehouse.

Smash the ball & collect 'em all - SMASHERS! The innovative Smashball puts the action right in your hands.

What's inside the Smashball? Just throw, smash, surprise to find over 100 wacky sports characters inside!

Rebuild & resmash your Smashball anytime! Battle against the Bad Sports to earn Smash Points and become a Smasher Elite!