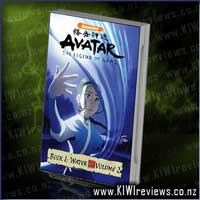 Chapter 5 The King of Omashu: Aang, Katara and Sokka are brought before a crazy old king, who seems to enjoy messing with the kids' heads.

Chapter 6 Imprisoned: Katara attempts to inspire the oppressed people of an Earth Nation city, occupied by the Fire Nation.

Chapter 7 Winter Solstice Part 1: The Spirit World - Aang, Katara, and Sokka arrive at a town being terrorized by a mysterious force from the spirit world!

Chapter 8 Winter Solstice Part 2: Avatar Roku - During the winter solstice, Aang must reach a Fire Nation temple while dodging Prince Zuko, Commander Zhao, and the Fire Sages who guard it.

In the depths of the Earth Kingdom, Avatar Aang is attempting to master the skills of water-bending. He will be put through trials, enter the spirit world, find enemies amongst friends, and friends amongst enemies.

This volume is part of such a larger story that it would honestly annoy me to just have four episodes out of the 20 in this book. Knowing that there are 61 episodes all-in-all, these four episodes would not cover much of the story line. But if you know the back story (which is very simply explained at the start of each episode), each episode works as a standalone.

Each episodes covers an idea; sexism, deception, spiritualism, and willpower. These sorts of ideas are covered in most Avatar cartoons, and promote individuality, and confidence in one's own abilities. These are great morals to teach children if you ask me. Defence is a more common theme, above offence, and encourages thinking before acting.

A highly enjoyable series. I would not only highly recommend this item, I would recommend the entire series. Just go out, find it, and watch it. It is amazing. And it is good for all ages. I will admit, you may feel silly, watching it as an adult, but you soon will be enthralled and won't be able to stop until it's finished.

I am a total fan/addict of this show, after I caught a few episodes on TV a while back. I was hardly ever able to catch them, due to a surplaus of work, and a deficit of working VHS recorders, but whenever I got the chance to see a show, I took it.

I love the whole elemental-magic-meets-martial-arts premise of the show, with certain skilled people being able to control each of the elements. Personally, given the choice, I would prefer to be an Airbender, because I tell ya, that little bald kid can sure get himself into, and out of, a lot of troublesome situations with a single breathe... when controlled properly.

Overall, this is a great series, awesome for the kids, and just as awesome to adults who still enjoy a bit of kids TV. Clean, with minimal explicit violence, no foul language, no nudity or sex scenes to worry about... it's wholesome entertainment with a lot of good moral and ethical guidelines in each episode. My 7 year old son ADORES this series now, after seeing only the first 4 episodes. A definite contender for Supreme Cartoon in my books! The only niggle I have is that they are releasing them only 4 episodes at a time, when the whole series is available.