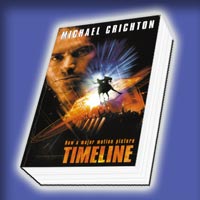 Disclosure StatementFULL DISCLOSURE: A number of units of this product have, at some time, been supplied to KIWIreviews by the company for the purposes of unbiased, independent reviews. No fee was accepted by KIWIreviews or the reviewers themselves - these are genuine, unpaid consumer reviews.
Available:
20 February 2004

ONE MAN'S FUTURE LIES IN THE PAST

An old man wearing a brown robe is found wandering, disoriented, in the Arizona Desert. He is miles from any human habitation and has no memory of how he came to be there, or who he is. The only clue to his identity is the plan of a medieval monastery in his pocket.

This mystery will catapult a group of young scientists back into the Middle Ages and into the heart of the Hundred Years' War.

Well, this had to be a good one. Not only has it been made into a major motion picture, but the movie is going to star Billy Connelly! Now that HAS to be a major drawcard, it is for me. :)

Always a fan of the harder Sci-Fi stuff, where it's heavy on the 'Sci', this book grabbed me fairly quickly, basically as soon as the theme of Quantum Physics was introduced. I really enjoy stories that include such esoteric high-brow science, and then back it up with some real-world evidence and scenarios. Gives the story a feel of authenticity that surpasses your sense of disbelief.

Add to that the total immersion in Middle Age Europe, with the highly detailed descriptions of the medieval period, the dress, the style, the warfare... all of which I have had some passing experience with during my days as a Living History Re-enactor... it really added something extra to this story for me.

The story starts off in the middle of nowhere, a couple driving through the Arizona Desert. They come across a strange man wandering in the middle of nowhere, near dead and seemingly affected by exposure. From there, through a short series of interconnected micro-plots, we reach the main theme of the story... the Human Element in a Quantum Experiment... "Curious Monkey" + "Unknown Raw 'Nature of Reality' Stuff" = a recipe for a visit from the Stuff-Up Fairy. And when you are talking about time travel and the consequences of it, it becomes a much more complicated affair.

I can't really go into too much detail about this book, without giving away major plot elements. It is so jam-packed with detail and action, to go into it much further would spoil it for the reader... but I can strongly suggest that the movie would also be great.

As with many stories, one could safely imagine that the book and the movie will be the same story, but told in such vastly different media that if you like the movie, you should buy the book. I LOVE the book, but am more of a visual person, so I plan to see the movie and feel reassured I will probably find it also highly enthralling.

Overall, this is a great one!

Take 14 of New Zealand's best-loved native animals, split them down the middle and what do you get? Nearly 200 crazy Kiwi combos, from rare to wacky. Mix and match for hours of fun. Funny pictures of 'Moretaras', 'tuaporks', 'seawis' and 'ki-lions' are teamed up with similarly mismatched poems: 'My beak has nostrils at the end; it's useful I suppose. But don't you think it's kind ... more...