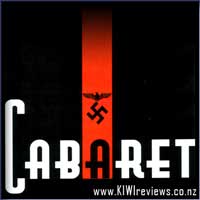 Disclosure StatementFULL DISCLOSURE: A number of units of this product have, at some time, been supplied to KIWIreviews by the company for the purposes of unbiased, independent reviews. No fee was accepted by KIWIreviews or the reviewers themselves - these are genuine, unpaid consumer reviews.
Available:
3rd - 19th May 2007

"There was a Cabaret and there was a Master of Ceremonies and there was a city called Berlin in a country called Germany. it was the end of the world and I was dancing with Sally Bowles... and we were both fast asleep..."

In the midst of the Nazi uprising Sally Bowles is trying to persue a decadent lifestyle in a sleazy nightclub in the middle of Berlin. The year is 1933 and a young American writer, Clifford Bradshaw, arrives in town to persue his great nocel. Through a series of foreboding events, Sally and Cliff discover love and friendship, with unexpected consequences.

The Nazi regime hangs heavily on the shoulders of the German people. Through hope, greed and sadness we witness the demise of the characters. Their hopes, aspirations and the very question of life itself will be stripped to the very bone as the Nazi regime takes a strangle hold on their lives.

The final curtain will mark the final fall of Nazi Germany. A prophecy will be fulfilled, as told by the last survivor, seen scrubbing the war-toen floorboards as she reunites with the memories of her past.

From my youth, I recalled one or two stanzas of a couple of the songs... so it was with great anticipation that I arrived at the delightfully cosy Abbey Theatre in Palmerston North to see this show. As the lights lowered and the show started, I was immediately taken by the EmCee character... very vibrant, alive, cheeky and full of 'spark'. This was amplified by the risque nature of it all. The actors held little back, and the costumes held little in... this is definitely NOT a family show!

When in her manic-happy, flamboyant and flippant moods, Sally, played by the talented Val Andrew, reminded me of 'Queenie' from the second series of Blackadder, with the whole 'OF COURSE I can do whatever I want, why do you think otherwise?!' attitude. it was hilarious in places, despite the obvious somber mood of the scene. I know that sounds almost like treason, but the forced good cheer just struck me as so endearing, I had to smile. "A stiff upper lip in the face of adversity"... a truly British mindset to offset the pragmatic pessimism of the American counterpart, Cliff Bradshaw, played to great effect by Mark Edwards.

Other familiar faces were the ever-talented Dean O'Flaherty, as Herr Ernst Ludwig, familiar from his recent stunning appearance in Les Mis, and the truly stunning Carry Green who was also in Les Mis, as well as putting in an impressive performance in Oliver late last year. It was a shame that she only made it into the ensemble this time around.

Other notable performances were put in by Scott Andrew as the ever-raunchy EmCee, who had me howling with laughter during his "I am the only man" scene... a fact he pointedly showed off in a later death scene, much to the titillation of the female audience members.

He reminded me, in many scenes, of Jude Law's android lovebot character from "A.I. Artificial Intelligence". Also a stunning performance throughout by Wendy Newth as Frauline Schneider, who impressed me greatly with her singing in German. As a very light speaker of the language myself, I was awed by her ability to sing it with near-perfect inflection and cadence... very difficult for a non-speaker of German, so I must wonder if she does actual speak it herself.

I was quite taken by the little scenes that illustrated the attitudes of the day. These usually involved our friendly MC again. One of the ones that most appealed to me was the scene where he danced with a woman in a monkey costume, professing his love for her, and wishing "...they would just leave us alone..." as it really did bring home how the Nazi's saw the Jews: sub-human, no better than animals, not really people at all, just beasts to be treated as cattle... worse even, because at least cattle had a useful purpose!

As the play reached it conclusion, I felt the biggest highlight of how "Germany" had turned into "Nazi Germany" was brought about in two key scenes. At the start of the play, our American lead was shown great courtesy and respect by the porter at the train station, however as he departed, he was treated with rude arrogance and bullied by the very same porter, highlighting how the Nazis had bestowed upon the loyal a sense of moral superiority over any other race, creed or nationality. Secondly, the closing cabaret act, where it was clear that the heart was gone, the soul had died, and the cabaret performers were merely going through the motions. All the -spark- had gone and only moving shells were left.

Overall, the props and sets were really well done, giving an illusion of depth and space the belied the stage's actual small size. Dr Who eat ya trans-dimensional heart out!

The final scene was perhaps the most poignant and powerful, as an elderly Frauline Schneider knelt, scrubbing the floors, with the ghosts of those she had known revisiting her, close, but never again to touch her life. All those she had known, loved or disliked, came to 'see' her, in her mind's eye... I was almost in as many tears as I saw upon her sad, lonely face... such passion to the art of stage theatre is truly... astounding. This really was a wonderful show put on by a talented crew.

Journey to Dragon Mountain is the first feature-length outing for Mike the Knight.

In the special, Mike's father the King is on a mission to save Glendragon by returning a crystal jewel to the giant dragon of Dragon Mountain. Mike and his sister Evie secretly follow their father and unfortunately for the King, Mike's attempts at being knightly only make the mission harder. But when Evie accidentally causes a rock fall, it's Mike who bravely saves the day.