ProdID: 1373 - Night of the Hawk
Written by Dale Brown 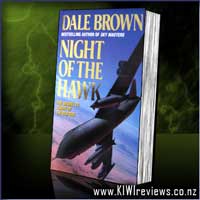 Night of the Hawk product reviews

In Dale Brown's classic best-seller Flight of the Old Dog millions of readers were gripped by the adventures of the crew of a high-tech B-52 bomber - now the final episode in the incredible saga of the 'Old Dog' can be told.

At the end of that terrifying mission, Lt David Luger was left for dead on a frozen Siberian airfield - but Luger didn't die. Captured and then brainwashed, he was sent to a secret research facility in Lithuania, where he developed the first Soviet stealth bomber, the Tuman.

But the old order was changing fast, until finally the Soviet Union collapsed, and the officer in charge of Luger and the Tuman was facing disaster. Refusing to scrap his prize project, he hatched a plot to allow the now independent Lithuania to be overrun and occupied once again.

On discovering that Luger is still alive, the US quickly sends a rescue team, including old crewmembers of the Old Dog - but it is too late. The desperate play for Lithuania goes ahead, and the US team is trapped inside the research compound. It is a crisis that could explode into full-scale war, and as the US President weighs his options, the crew of the Old Dog must devise a few plans of their own-

Eight jolly reindeer flying with delight. Merry Christmas to all, and to all a
good night! Young readers will love counting down from eight to one in
this adorable story book featuring Santa's famous reindeer! The familiar,
catchy rhymes combined with Jacqueline Rogers' soft, sweet illustrations
make this a perfect story to celebrate Christmas!