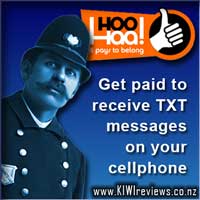 The best ideas are worth their weight in cash... or at least a mobile phone credit! And that's what you could get every month if you join HooHaa.

All you have to do in return is let us send you a few txts, up to a maximum of 4 per day. They'll be from your favourite shops, movie theatres, fast food joints, petrol stations, that sort of thing, and they'll tell you about super specials, sales or new offers they've got on. As a member of HooHaa, you'll be first to know!

For each txt advert you receive from us you'll get a phone credit of 10 cents. That's right - we pay you, it doesn't cost you a cent! And don't worry, your private details are 100% safe and you can stop at any time. So what are you waiting for? Sign up now!

I signed up when they first started advertising this service and thought well it is a great way to get some extra spending money especially since they say you don't get more than 4 per day so that sounded so ideal but I found I was lucky to get one text every few months and soon forgot all about it until I found it listed as a product to review on KIWIreviews.

I thought I should probably check on how my account was doing, open or have they closed it due to inactivity? I battled to log in as I forgot my log in details so I thought well I will sign up again and start afresh... well I got an error message saying that the number is already registered but at least then I realised what my user name was and could sign in.. great or so I thought. I got to a page where it says to check my details and update them.. so I did and then thought well let me see how many points I have and what sort of rewards I could get for them but it just stays on the "home page" and I can't get to any other page as there are no options. I emailed them for help and haven't heard anything at all back so can only assume that they aren't interested in sending me the texts anymore as I'm sure I haven't had any of them in a few years either (the reason I forgot about the site in the first place) and for that reason I can't really recommend them to others but the idea is good.

To be perfectly honest I had forgotten all about Hoohaa, it's been that long since they sent me a text so I logged in and found I have 50 moolah points (they have swapped from cash reward credit on your phone to points which you can redeem now) and I last used it in 2009.

I didn't receive many texts when I signed up, I assumed this was because they didn't have many sponsors and no-one tries to sell anything to Stewart Island, but the new website is revamped and very nice to look at, they also seem to have a lot more sponsors and rewards to choose from; rewards people actually want like Countdown, Vodafone, Telecom etc. I've answered a few questions which has bumped my points up to 96 (that's as many in five minutes as I earned in five years lol).

Hopefully now I've logged in again I'll get some more texts and I see they're offering polls now too, another good way to bump up your point balance; the service was always a good idea, it's just a shame it never took off how they hoped as they definitely advertised the hell out of it when it first started.

So... just another 4,004 points to a $20 Countdown voucher; hopefully by the time I have earned it it will be worth more than one loaf of bread! I enjoyed getting the texts last time, even if they were few and far between, but they were relevant to me which makes a refreshing change.

While this seemed like a good idea when it came out, I only ever got money off it once. And that was $5 of credit. At one point there was $10 owing to me, but this was never received, and no answer was ever given.
After about a month the txts lessened and I was lucky to get even one txt a month. So it is no surprise for me to look online and see that it no longer exists. It is annoying though that I never received any communication about them closing down, nor where my cellphone number would end up, perhaps it's a good thing that my number has changed since then?
Should something like this come along again I will be very dubious about it lasting.

ADMIN NOTE: This service, and it's website, are still operating. The website has some technical difficulties at present, which may have led to the perception it has shut down. We are seeking full clarification from the operators of HooHaa.

When I first discovered a bannerad for this site floating around on TradeMe and decided to click it out of sheer curiosity, I had to wonder what brand of scam this was... after all, knowing that both of the major cellular suppliers in NZ won't usually accept payments of less than $20, it struck me as impossible to earn 10cents for receiving a TXT. After having a good hard read through the site, I saw that they they compound the 10c's until you collect 25 lots, and then they pay you out in multiples of $2.50.

It still seemed strange that they could do this, but after chatting to some contacts at each of the major cellualr suppliers, it was confirmed... this can, and is, being done quite regularly. Joy of joys, FINALLY there is someone willing to pay me to receive junkmail!

I have been signed on for a couple of moths now, and though I have only received a total of 5 txts (yup, a whole 50c worth!) it has been an easy experience... except for one TXT that came through and woke me up at 4am, but that was an accident and they even sent me a txt that afternoon to apologise! Nicely done folks!

The site itself has some interesting extras, such as weekly prize draws... when I signed up, the draws were for some excellent prizes, such as a DVD player, surround sound speaker package, TV, etc... now it's degraded down to a $5 credit drawn on Fridays... not unexpected, but a little disappointing that their contacts have dropped out so badly. (Any businesses wanting to make some excellent contacts and exposure may wish to consider talking to these guys, and flick them some nifty gear to give away...) ADMIN NOTE: This comment is not endorsed or authorised by HooHaa, and is a personal suggestion made by the reviewer only.

Overall, an easy way to earn some credit on your cellphone bill, but don't expect to be raking it in... the very best you can hope for is $1 a day, and that is about 100 times more than you'll actually get... but hey, in this day and age, isn't it nice to know that at least SOME of the junkmail earns you cash to compensate you for the time it takes to read it? It's a slow process, but it's free, it pay you, so why not?!

We are 100% New Zealand owned and operated.

Our goal is to provide our customers, with great value deals that won't break the budget and with a great range of items to satisfy any shoppers needs!
We offer promotional products on a daily base..

We have thousands of products in our state of the art warehouse ready to go and we are continuously growing to bring you a bigger and better range. Since moving to a bigger ... more...