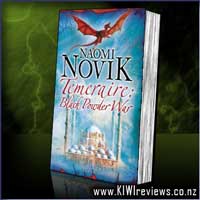 Capt. Will Laurence of His Majesty's Aerial Corps and his extraordinary dragon Temeraire, gratefully anticipate their voyage home after their tempestuous adventure in China.

But before they can depart urgent new orders arrive: instead of sailing with the fleet, Temeraire and his crew must make a perilous over-land journey, stopping briefly in Istanbul to collect and escort a precious cargo of dragon eggs back to England.

The cross-continental expedition is fraught with danger; frigid mountain-passes and sterile deserts will drain their strength and make them vulnerable to attacks from feral dragons and Napoleon's aggressive infantry who infest the land. And a Machiavellian herald precedes them, further hindering their progress as she spreads political poison in her wake.

Lien, the white celestial dragon, fervently believes Temeraire to be responsible for the humiliating death of her beloved princely companion and has vowed to ally herself with his greatest enemy to destroy everything and everyone the black dragon holds dear, including Britain...

After having rather enjoyed both of the previous two books, I found Black Powder War to be somewhat of a disappointment.
The storyline was still reasonably enjoyable, with Temeraire and his crew now in charge of two precious dragon eggs to be brought home from Istanbul, causing them no end of drama and chaos in the effort to keep the eggs in one piece and still in their possession. But for me, this book lacked the ability to keep me enthralled the whole way through. It may have been partly to do with the timing of reading it, right in the middle of a very stressful house-move, but I also found the somewhat overdone war scenes (of which there seemed to be just a few too many this time round) seemed to make things drag, and it just lacked some of the "oomph" the previous two books had had.
There were still small parts that kept me interested enough that I didn't just put the book down altogether- was Tharkay, the guide they'd picked up to help them find their way to Istanbul, as reliable and trustworthy as he said he was? Would the ferals that had decided to tag along with them bring more problems than they were worth? And just how far would Lien go to get her revenge? These were just a few of the questions I was asking through the book, and were what stopped me giving up about halfway.
If you've read Temerarie and Temeraire: Throne of Jade, I would still recommend giving Temeraire: Black Powder War a go, just not if day to day life is busy, as, like me, you may end up finding it hard slog to get it finished.

Another great read from Naomi Novik!
Again, I was excited when I saw a new novel about Temeraire on the book shelves and couldn't wait to get my hands on it. And I wasn't disappointed...

This new instalment in the life of Temeraire and Will Laurence gives yet more stunning descriptive writing, taking you from the majesty of the Orient, through the unforgiving deserts of Mongolia, on into the harem-filled Turkish cities and finally into the depths of the German/Prussian countryside during the midst of Napoleons latest forays to conquer the world.

There are many trials and tribulations along the way, with bandits, feral dragons, a very cranky Lien creating dissent where ever she can for Temeraire and his loyal crew, and of course the war... all in the aim of getting a precious cargo to England.

Novik has added another wonderful story for those who are fans of her writing... and still has more to come if I'm not mistaken.

I look forward to reading more to see if Temeraire can implement the changes he wants in England, and to see if they can defeat the seemingly unconquerable Napoleon...

Although he comes from a long line of archaeologists, Edward has never discovered anything. Then one rainy night, he stumbles upon what could be his first great discovery.