« Unseen by the Naked Eye : Heaven and Earth review 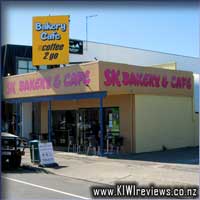 Where customers and quality come first.

On a recent visit south to attend an event in Wellington, I passed through Otaki and having read the review of this place thought I would stop in and see if their pizza really was as good as said. There were 3 types on display, and not really knowing what each was, since they were all topped with a generous amount of cheese, I asked one of the staff who was standing in front of the display cabinet with a notepad. Her reply was to simply glance at me, then call out "COUNTER!" to another staff member. I thought that was quite rude actually. Anyway, the young lady who came from out back was quick to give me the flavours, and so I bought a slice of their pepperoni and one of the meatlovers to take with us as we drove. I really was put off staying to eat by the attitude of the first girl. As we drove south I happily munched on probably the best tasting pizza I have had in many years. Full flavour, plenty of filling, especially meat, and a delicious pasty base. It was a bit thick around the edges, leaving me with a really chewy final couple of mouthfuls, but that wasnt too bad really because I like food with a bit of bite. Stunning pizzas, at least, but I dont think I would stay to eat.

While passing through on our way south to review the Flight Experience simulator and Mercure Hotel recently, we decided that the grumbly-tum-bug was getting a little too active and needed dealing to. A few minutes later, as we pulled into Otaki, we spotted this place and thought it sounded worth a try. The signage was quite eye-catching, and had some appealing wordage... but when we tried to pull over, the closest we could get to the place was still a bit of a walk away. It was a hot, muggy day, and with a hungry and grumpy little man on board, it wasn't pleasant to have to wander in the scorching sun.

However, once we got inside, all was forgiven. The smells, the cool air and shade, the TV with a kids DVD playing in the corner with the toys, and the sheer range of foods spread out in the display cabinets... it was almost too much like heaven...

After much wandering up and down the selection, we finally decided which culinary weapons to bring to bear against the marauding grumbly-tummy-bug army... I decided to throw a salvo of "Meat-lovers Pizza" at them first off, followed by a barrage of sandwich and fruit juice, while my partner went all out calling in an air-strike of Macaronni Cheese, Hawaiian Pizza slice, sandwiches and juice. Our little lad opted for a commando-style Gingerbread Man sneak attack, followed up by a bombing run of fizzy drink. For sheer quantity of portions, they can't be faulted.

The pizzas slices were top notch! The meat-lovers was full of flavour and meat, with a semi-sweet base which really offset the tangy sauce nicely. The hawaiian was brilliant, with big chunks of pineapple and ham, and noticable chunks of onion throughout. The sandwiches were good, but nothing over the top... better than average, I would have to say.

However, they let themselves down with the Gingerbread Man, which tasted... well... just wierd. Not very pleasant, but not outright yuk. And the macaronni cheese, though there was nothing wrong with it, it was quite bland and uninspiring. Some ham or bacon in it would have livened it up a lot, and we had to add some salt and quite a bit of pepper to give it some flavour. To those who like their Mac'n'Cheese on the flat side, this would be more to your taste. On the upside of it, it wasn't gluggy and starchy at all, which is remarkable in itself, so...

In the end, we had to make our departure due to travel time pressures, and we left with an overall positive impression, but if you want to stop in for some seriously good food, I suggest you time it for low-traffic times, and be prepared to hunt for parking.

Overall, well worth the visit, and we grabbed a couple more sandwiches and another slice of pizza 'for the road' because we just couldn't leave it behind.