And Did Those Feet... review

ProdID: 1317 - Voice of the Gods
Written by Trudi Canavan 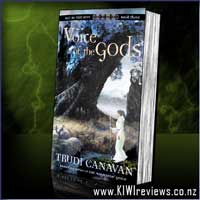 Voice of the Gods product reviews

As protector of the Siyee, Auraya is sent to investigate a stranger sighted on their lands. She develops a rapport with this mysterious woman, who claims to be a close friend of Mirar, the founder of the Dreamweavers - but the secret she divulges sets Auraya on a dangerous path of conflict with the gods.

Meanwhile, the Pentadrians, regaining strength under a new leader, plot and scheme for any means to bring down their enemies - not anticipating that the White will send the Siyee against them. It seems that the consequences for all sides will be disastrous.

Mirar now has a respected place amongst his people, so the stakes are very high when his fragile friendship with Auraya may prove to be the very cause of her destruction.