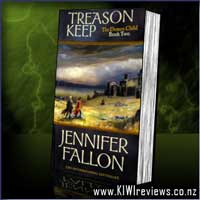 'The Harshini will not survive long enough for another demon child to reach maturity, even if such a child was born tomorrow'

On the brink of death, R'shiel is taken to the Harshini haven of Sanctuary, where crucial decisions are being made. Can the demon child's life be saved?

On Medalon's northern border, Tarja Tenragan and the Defenders are helpless as Karien threatens war. An alliance with the Hythrun could be Medalon's only chance, but should Tarja trust Damin Wolfblade, Warlord and heir to the throne of Hythria?

King Hablet of Fardohnya will ally with whoever seems to offer the most reward. His eldest daughter, Princess Adrina, could prove to be his greatest asset. However, the wayward and rebellious Adrina has her own plans and they do not include obedience... to her father or her new husband.

Wolves of the Beyond - Spirit Wolf
Rating: 8.5

As R'shiel begins to learn more about her powers, we are now introduced to one (of many) of the Fardohnyan Princesses - Adrina, who seems to be nothing more to her father, King Hablet, than simply a pawn in his game of politics and betrayal (hang on, aren't they the same thing?). Once bound to the Karien Crown Prince, Cratyn, Adrina begins to play her own game of political rebellion, causing the line between enemy and ally to blur even further on many occasions. The Gods and demons again appear to wreak havoc and chaos as R'shiel starts to work towards the task they have set her, and throughout the entire book, just like with the first one, I was totally enthralled, the pages turning in rapid succession! When I first looked at this series, I had thought these books could be interesting, but I wasn't holding out much hope that they'd be enjoyable. Boy was I wrong!!
Treason Keep is a fantastic sequel to Medalon, and I would strongly suggest giving Jennifer Fallon's Demon Child trilogy a try.

Vali Hallsdottir has returned to her homeworld of Muspell to discover that her nation is in chaos, preparing to face invasion from the neighbouring country of Darkland. When her friend and mentor, Idhunn, is brutally murdered and her spine removed and stolen, Vali falls under suspicion and is held by the army of the Morrighanu, but released by a mysterious force.