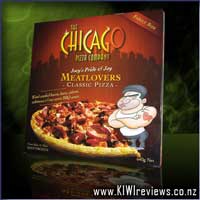 Joey 'Beefs' don't like much - but he sure loves his Chicago Meatlovers. A former butcher's apprentice, Joey knows his fine cuts from the baloney.

It's fully loaded with wood-smoked bacon and ham, cabonossi, salami, onion and capsicum layered over the family's secret BBQ sauce - it ain't for the the faint hearted.

This brand is my go-to pizza brand. I normally buy 2 of these and 2 BBQ chicken & bacon - both are tasty and really good value.
This pizza is big enough for a family and bigger than other brands at the supermarket. It's often $5.50 so that is a cheap meal. Buying one at our local pizza place is about $14 and is only marginally bigger. We usually add extra cheese & homemade relish but the pizza is good enough without adding anything, we just like the extra height & flavour as we're cheese-o-holics.

We've found that defrosting this before cooking tends to lead to a much yummier soft base. In the past, we'd cook straight from frozen but I do like the base soft. It's not a huge (high) base either. The packet says that it's a crunchy base, not sure if that's accurate. I thought Chicago was famous for deep-dish pizzas so the bases may tend to be soft rather than crunchy.

Everything about this pizza is good - tasty cheese, a good quantity of well-flavoured meat. I don't bother buying any other brands, this is the only one I look at. I usually buy at Countdown and it's on special every 2-3 weeks.

I must admit Pizza is one of my favorite things to quickly do when I am strapped for time to feed myself and the kids. This is one of the better supermarket pizza's that I have tried sometimes they can be a little on the expensive side so I usually buy these when they are on special. These can usually be found in the freezer section of your supermarket as I don't think they come fresh,the price varies when on special they are around the $6 dollar mark and they also have a special 2 for $10.

They are very easy to prepare,you just remove from the freezer and open and place on a oven tray and bake for around 10-15 mins.I find the topping to be ok but sometimes adding a extra cheese is nice. Must remember to not overcook as it can sometimes end up a little dry so adding a bit of extra sauce is also good. The pizza is really a quick alternative and with not a great nutrition value should be not eaten often,We only have this as a treat or for movie nights or with friends after a few drinks

I would buy this again as the taste is not too bad.

I often pick up a frozen pizza to have in the freezer for the occasional lazy night cooking. But lately I've found another use for them. They make a fantastic "bring a plate" option if you can't be bothered making a salad or if you know everyone else will bring cake or chips. I often hear at parties "who brought the pizza?" because it's been gobbled up in seconds. I took our Chicago Meatlovers to a friend's place last night for a BBQ.

I pre-heated the pizza beforehand, but left it uncut until we got there. Usually I find the pizzas we get are easy to cut up with a sharp knife or a pizza cutter. But this pizza was a bit tougher to cut up. I got tired part way through because I was sitting down trying to cut it at the table. So in hindsight I should have cut it at home. In any case I managed to cut it into 8 pieces which is standard but for a party I would normally do 16 pieces. We gave the children some to go with their sausages. My baby yummed her piece up, working on the dough for ages. My 5 year old was excited to see the pizza but after the first bite, she wasn't interested in finishing the piece.

I ate a piece with my dinner and I found the topping a bit lacklustre. You could see all the ingredients which was nice. The whole diced tomato, chunks of onion and even the quality of the bacon pieces. But there was a severe lacking in cheese. So if I had this again I would want to add more cheese at home first. The rest of the pizza was munched down by hungry boys after the sausages and steak ran out. So, in conclusion this wasn't terrible but it wasn't the best example of a frozen pizza I have used either.

As far as supermarket frozen pizza's go this one is pretty good. Always a favourite choice in our house is meatlovers pizza and this one certainly has a nice amount of meat and barbecue sauce. It sticks to the meatlovers tradition with no vegetables like some frozen pizza's seem to sneak in which totally ruins the experience for my veggie hating 10 year old.

The taste is nice the barbecue sauce has a nice smoky flavour and the meat although obviously really processed tastes nice too with the pepperoni being not too spicy. The base is a nice thickness it is not too thick or thin and when cooked has a nice crisp too it while still being nice and soft too.

They are one of the cheaper pizzas at the supermarket too so that is always a bonus and you feel like you are having something decent. A perfect quick dinner when you've had a late staff meeting or just can't be bothered cooking. Nice accompanied by some garlic bread and crinkle fries when you want to be really unhealthy.

This is one of the best super market pizzas I have had, there is a balance on the toppings by making it meaty but not going over board on the sauce.

I find the pizza by the time you get it out of the oven or microwave looks very good however the moement the pizza comes out of the box frozen it looks a bit munted with toppings thrown on at random but its no matter with the end result looking snazy.

The pizza is really a multi purpose food, want a crispy base put it in the oven, want a bread like base place it into the microwave.

An issue with this is that its 6MJ per a pizza which is 75% of the daily recommened intake per a person.

Overall this pizza has great taste a great price and well worth the buy.

Having tried two of the Chicago range already, with mixed results, I wasn't sure how things would go with the Meatlovers, especially as, with other brands, Meatlovers is usually one of my least favourites. But this time, I decided that I'd try cooking it via the microwave to see if that improved the base any. This resulted in a far more enjoyable base, causing this particular variety of meatlovers to be the only one I can honestly say I've thoroughly enjoyed. What was even more surprising, was that my 6 year old son (who had always refused to eat pizza, insisting that he didn't like them... strange li'l fella, considering BOTH of his parents absolutely adore this particular food item!!) gave it a try, and then proceeded to inhale his slice with great enthusiasm!!! Thank you Chicago!! Your pizzas have converted my son into a pizza fan!!
As with the Sicilian, the Meatlovers was full of rich flavour, and loaded to the gills (well...crust) with delicious toppings, consisting of a good variety of meat, which had a decent hint of spiciness to it... a definite plus.

I have had many supermarket brought pizza's that just don't live up to expectations, however this was not one of those.

It is a delicious pizza with a crust that is just right, and the right amount of toppings.

This is one pizza I will most definitely be buying more of on the future.

So, a vegetarian writing a review for a Meat-lover's Pizza? Well, far from submitting to the challenge and actually trying it for myself, I decided human experimentation was needed. My future brother-in-law to be precise.

When people refuse the offer of food, it is usually because they are being polite. But when this Pizza was placed under his nose, manners were forgotten and this pizza was inhaled in seconds. There was none left for anyone else to try.

Trying to make sense of the eating sounds and interpreting them into words was a little harder. Feed back later included the words, meaty, tasty, where can I get them? and I'll come back again.

Visually, from this vegetarian's point of view, the pizza was not one of those "rich-on-base, thin-on-toppings" pizzas that are prevalent in the supermarkets. This was coated in a rich sauce, thick with meat and dripping with cheese. Just the sort of pizza I will keep in the freezer for the many visiting carnivores.

Being a bit of an experienced pizza snarfer, I have become accustomed to quality munchies in the traditional Italian style. Not often do I find an edible pizza in the frozen section of the supermarket, so it was with great interest, and a degree of flagrant impulse buying, that I grabbed this one.

Following the clear instructions was a breeze... and I had to note with pleasure that they made comment that ovens behaviour can vary, so cooking times were a guideline only. But I broke all three Golden Rules of pizza cooking: 1 - Don't overcook the pizza... 2 - DON'T overcook the pizza... and 3 - DON'T OVERCOOK THE PIZZA! I suspect this is what made it taste a little TOO smokey for my tastes. However, since I botched the cooking, I figure I should give them the benefit of the doubt, since even slighty charcoaled it was still extremely tasty indeed!

Overall, a surprisingly good pizza for a reasonable price, though it was on promo special, so it's normal RRP may be higher. Anything under $6 will keep it in the "good value for money" range imho. I was also impressed to see the clearly readable section on Allergens, since this is becoming a more important aspect of food and one that is often overlooked by most food manufacturers. And to top it all off... 100% Kiwi Made!

The best and hottest mustard of the Sids Sauce range.

•  Mix with sauces for that extra zing.
•  Makes a lovely crunchy topping when mixed with breadcrumbs.
•  Combine with butter to make a butterpat for meat & fish.
•  Cream with mashed potatoes and potato ... more...