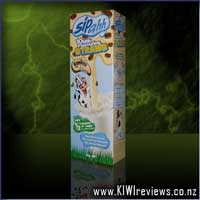 The product is much loved in my house, but this would be the flavour least requested. I buy every flavour in boxes so she can have a choice. She will only really ask for Cookies and Cream if she was feeling like Chocolate and I've run out.

Not at all to my tastes. Too sweet, and didn't really taste like cookies, cream, or a combination. Actually tasted really similar to the caramel variety. If it wasn't for the little brown beads in the straw, I would have to wonder if perhaps there was an error in the packing line and they got the straws in the wrong wrappers.

Yep this one just didn't have the flavour I was expecting, I like some of the other reviewers here absolutely loke cookies 'n' cream ice cream but this one just didn;t seem right, while it did have a flavour that wasn't quite caramel and it wasn't quite any other flavour I have to confess it wasn't Cookies 'n' Cream to me, but I found it to be a nice flavour none the less. However this product still scores high marks in the rest of the points for the same reasons the other products have scored as well.

I guess you can't win them all, but a 10/10 for effort. After trying some of the others, I happened to this flavour at random, and I must say I really couldn't tell from the flavour in the straw what it was meant to be. The taste was just too subtle for me.

Again, as with the other straws, this was tested using rice milk because soy milk would over-power most flavours (and this one in particular), and so would make a treat for someone who cannot tolerate dairy products. Again, this product is free from a number of other allergens too, making it suitable to plenty of people who would normally avoid milk-shakes.

Sadly, I must agree with the previous reviewer. Having picked a straw at random and consumed the drink without looking at the wrapper until after I had finished the drink, Caramel and Mocha were my choices, and no-one was more surprised than me (despite the fact I was alone in the room at the time), that it was cookies and cream. The milk was still flavoured as desired, it just wasn't flavoured as advertised in my opinion.

I think people may have been a little over zealous when creating flavours, with the products not living up to the name.

Overall, a dissappointing result, really, being a CookiesNCream addict.

Despite loving Cookies & Cream ice-cream, and hoping for a similar flavour, I found I was still surprised... by how much it tasted almost exactly like the Caramel flavour straw, which was a great pity indeed.

Overall, somewhat disappointed at how alike the two flavours are. The differences are there, but so subtle they may not be apparent to the casual tastebuds. On the plus side, once again a treat for the chronic sweet-tooth addict.

KGB Vodka Lemon is a blend of 100% premium vodka and lemon. It is lightly carbonated, refreshing and full of zest. The brand KGB was launched in Australasia in late 1997 and since its release, it has taken off with phenomenal success. Moving from strength to strength, it is now exported to countries as far afield as Brazil and China.

KGB is packaged in a stylish white-sleeved bottle that is easily recognisable.