ProdID: 107 - George of the Jungle
Directed by Sam Weisman 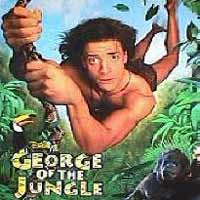 George of the Jungle product reviews

Deep in the heart of the African jungle, a baby boy is raised by gorillas. He grows up to be the hunky, heroic, yet clumsy king of the jungle, George (Brendan Fraser - California Man aka Encino Man), who swings from one tree right into the trunk of the next!

But when a beautiful career woman named Ursula Stanhope stumbles into George's unnatural habitat, he's swept off his feet. Leaving behind his forest full of aniumal friends, including Ape, a talking gorilla and Shep, an elephant who aspires to be a dog, George plants roots in the big city of San Francisco... where the comedy and adventure only grow bigger.

Bigger than life, outrageously funny and loaded with eye popping special effects make George of the Jungle a must see for kids and adults alike.

Since I first saw this at the theatre George of the Jungle has always been a firm favourite of mine.

The movie starts off animated, talking about the heart of the jungle (and labelling surrounding parts as other body parts), shows how George ended up in the jungle and we get the fun theme song of the movie. Following on we see him as an adult, but not the smartest, after all he's been raised by various animals and who knows how many concussions. He falls in love with the visiting Ursula, tries to fit in in the city, returns home to the jungle to save his beloved friend Ape and try to keep the girl. This movie also introduced me to one of my favourite songs of all time, "Dela (I Think I Know)" by Johnny Clegg.

There's enough humour in this for everyone and it is a movie that is silly and knows it, unafraid to be silly (which is where some people loose track of things, yes this is a very silly movie but it isn't intended to be taken seriously at any point) and that's part of why I love it so much. The narrator, who is interacted with a couple of times, the elephant that acts like a dog, Ursula being sped up at one point (and her parents reacting to that), the narrator saying they reacted with awe "awwwwwwwwww, no! a w e! oooooh!" and other such fun moments, George of the Jungle is full of them.

I have watched this movie so often that there is nothing new to it for me but it is still just as fun as the first time I saw it.

George of the Jungle is a family fun movie. I watched this with my daughter not long ago and we have re-watched it a couple of times since. Its funny, and has a nice plot - predictable but still loads of fun.

Brendan Fraser is great as George, handsome but a big softie as well. This makes him appealing to the younger viewers as well. My daughter thought he was awesome.

Another big plus for my kid was the animals. Family comedies with animals are a huge hit with us, and this was no exception. The animals were funny and did lots of cool things which got lots of grins and giggles out of my girl.

Overall, we really enjoyed this movie, enough to re-watch it! Its good clean fun. Kids will love it. So pop some popcorn, wrap up in a blanket and watch this with your family!

This movie was ok, all the kids loved it and watch it regularly. I am one to watch movies over and over, and although this was really funny the 1st time, it is a bit taxing to watch too often.

It was funny and I did enjoy it, and kids seem to love it :)

Not exactly one of Brendan Fraser's best to date, but have to say for a cheap comedy rip-off of the classic Tarzan story, it rates above average at least.

Heavily over-acted, Jim Carey could almost have taken this role too, but he simply doesn't have the physique to pull off the role of a life-long jungle dweller. And can't do the 'dumb caveman' look that Fraser perfected in his "Encino Man" (aka California Man, for us non-Americans) movie years back.

As a light-hearted, no-brainer laugh-fest, this movie is a good one to choose. It has a good comedy spin on a story most of us would be family with to some degree. If you want a good family movie, this would be in the Grey Zone I would say. If you want a movie you can pay attention to, this is not in the right ball-park really. It's chewing gum on tape/dvd.