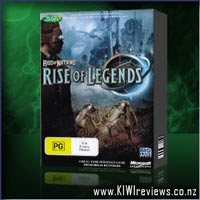 "Rise of Nations: Rise of Legends" transports gamers into a fantastical world, where they guide a young inventor's struggle to unravel his world's ancient past and unite its people against an unimaginable threat. Gamers can quickly build small villages into powerful expanding civilizations and lead vast armies into strategic battles between the forces of Magic and Technology.

A LAND OF MAGIC, steam engines and clockwork armies sounds bizarre. We are the first to admit that when we first played the demo version of Rise of Nations: Rise of Legends we wondered how well the whole package would hold together. Wonder no longer, the concept delivers a refreshing change to the genre with a wonderfully eclectic array of units set in a world of extremes.
Welcome to the World of Aio, which is similar to our world in geography only. It is peopled by three races: the Vinci, who are the masters of steam and clockwork devices (their units have the look of having being pulled from the blueprints found in Leonardo Da Vinci's workshop); there are the Alin, who dwell in the deserts and are masters of elemental magics - they can conjure elemental beasts as combat units; and then there are the Cuotl, who dwell in the jungles and harness the power of the sun.

The game is largely based on the existing Rise of Nations game engine with a few tweaks. As we have come to expect from Big Huge Games, the campaign is excellent with the initial scenarios used to introduce most of the game concepts. At its heart it is a strategy game that relies on you building a base/city and producing units to take on your opponent.

The unit effects and animations are superb. Muskets fire in a cloud of smoke, huge steam-driven cannons fire shells that are visible throughout their trajectory, and area-effect weapons pulse and blaze away. Combine this with good music and clanking, chugging sound effects and you have quite an absorbing gaming experience.

This is a good, solid real time strategy game that steps out of the ordinary fantasy theme and delivers a steam age world mixed with magic. Surprisingly it works well, and players are rewarded with a great story-based campaign and some challenging scenarios. We highly recommend it.