Gollum : How We Made Movie Magic review 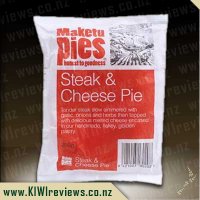 This is a great pie, one of da very best I have eva eaten. Best thing about it, it tasted good hot, great warm, and still tastes yummo when it is cold. Well done, dis is one cool pie!

i am addicted to steak-n-cheese pies. i cant help it, i love them to bits. after a long holiday while the local foodtown was converted to a countdown the best pies in the land have returned. yum! the best thing about these pies, they even taste awesome when cold! cant say that about many other foods of any type, eh.
good one guys, keep the good pies rolling out, i'll buy them.

I have enjoyed literally hundreds of different Steak and Cheese pies from around the globe on my travels. Spent thousands of dollars on these pastry packets of meaty bliss. And I would have to say that I was missing out on a taste of heaven until I munched on a Maketu Pies S'n'C Pie.

It was early morning, I was on my way to work and I was running late. No time for breakfast at home, so thought I would grab a pie at the service station near work. They were sold out. So, on impluse I shot into the nearby Foodtown to their hot chicken display down the back, planning to grab some chook bits and a few bread rolls, and snack on those as the morning progressed.

Tucked off to one side of the hotbox I spotted these pies, and JOY! they had Steak & Cheese. So I grabbed one, thinking "for two bucks, they won't be great, but they should at least be bearable." Took a bite... HOT HOT HOT! So I let it cool down a bit as I warmed up the store machines. Then started to feed... DROOL! It was so tasty! The pastry was a little too flakey for my liking, but the filling was REAL MEAT CHUNKS, in a tasty gravy, with REAL CHEESE TASTE!

Awesome pie! Not interested in any other brand now. If it isn't a Maketu's, I won't eat it! (Unless in dire need and nowhere near a Maketu's stockist.)

Yatai Food Caravan has become an institution in Palmerston North. Located in a lovely scenic part of The Square, in the heart of the CBD, you really can't pass through that corner of the Square and not see it.

Serving a somewhat European'ised version of Japanese cuisine plus some authentic Japanese fare, and all at very reasonable prices, it is a treat for all.

Well worth investigation, why not pop down and say G'day to Atsushi-san and his staff, and experience the taste sensations that make Yatai so famous.